The Computerized LEGO Foosball Table: Perfect to Watch While You Wait for the World Cup to Resume

Not only is this soccer table made completely out of LEGOs, it can almost play by itself! It’s perfect for right now, since a lot of people are going into complete soccer withdrawal while awaiting the next two series of matches that are coming up. 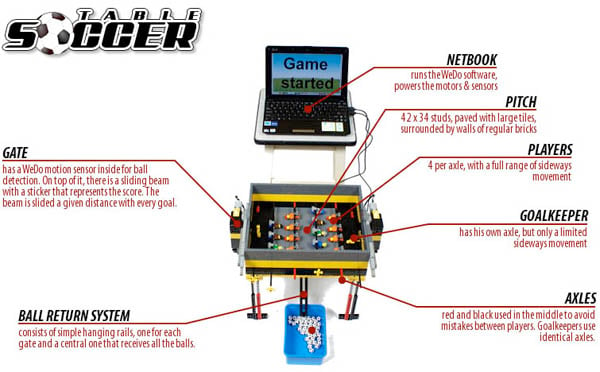 This amazing automated LEGO foosball table was created by Sariel using the LEGO WeDo kit. The score keeping, as well as the return of the balls is completely automated. The actual playing of the game is still done by us mere humans. No robots allowed, at least for now.

Each time a goal is scored, the table will show it on the top of the goal and play a sound. It’s kind of neat to see the ball slowly rolling down the paths to the plastic bin at the bottom. The only problem that I can think off is that most foosball players are rough with foosball tables. In all honesty, a foosball table like this wouldn’t last 5 minutes, with drunken players pushing and hitting it all of the time.