I recently had the chance to get my hands on Samsung’s new Android smartphone, the Galaxy S. To be specific, I tested the GT-I9000 – which appears to be the reference model for the series – and put it through its paces. The model I tested came with an AT&T SIM, so I can imagine the experience will be very similar to the Galaxy S Captivate, which releases on July 18th. T-Mobile is also releasing a version of the Galaxy S, branded Vibrant, Verizon has the Fascinate, and Sprint is readying the 4G version, the Epic 4G. 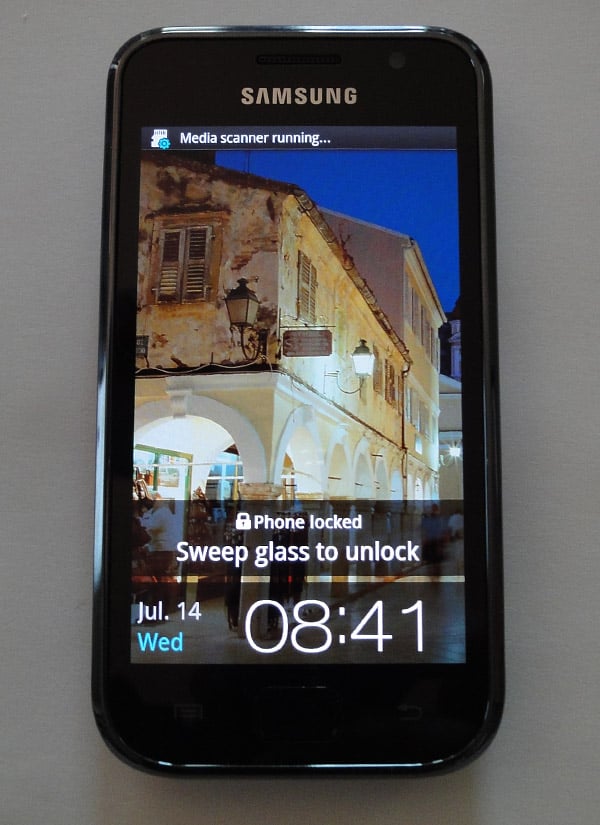 Unlike big chunky phones like the HTC EVO, the Galaxy S is about the same size as the iPhone 4, and aimed directly at stepping into Apple’s territory. When I first unboxedthe Galaxy S, its sleek, thin design is what immediately caught my eye.  Officially, it measures 9.9mm thick, and the iPhone 4 measures 9.3mm, but I certainly couldn’t tell the 0.6mm difference. As a matter of fact, it looks like it’s exactly the same thickness as my iPhone 4 – and actually seems a little thinner due to the curved edges. 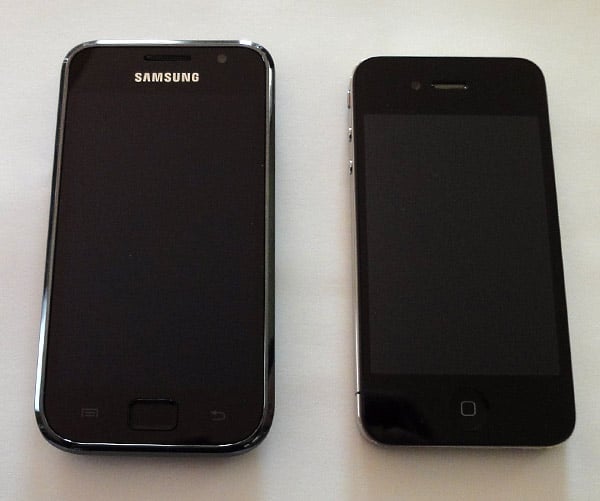 It’s a little hard to tell from these pictures, but the Galaxy S features three primary controls on the front, a push button for selecting menu options and two backlit touch-sensitive locations – on the left, a context menu, and on the right, a back button. This navigational mechanism worked well for me in my tests and took virtually no time to get used to coming from my iPhone. The power/standby button is on the top right side of the phone, while the 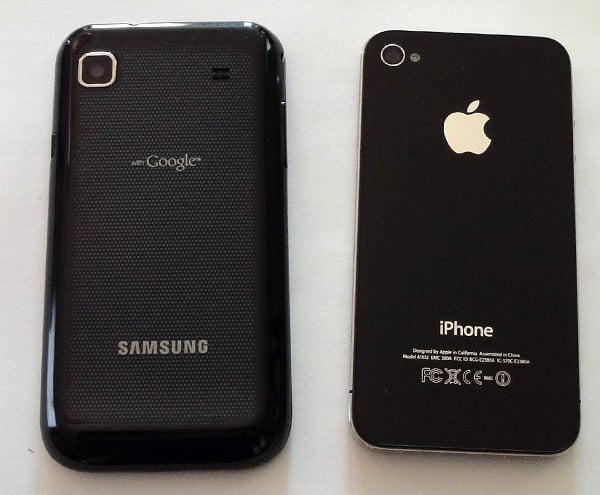 While I’m not thrilled with the plastic case design, it does mean the phone is very lightweight (119g), and feels good in your hand. One thing you’ll definitely have to get used to quickly is having to wipe its shiny screen off all the time – it’s a massive fingerprint magnet – but so are most touchscreen smartphones these days, right? The back is equally as fingerprinty.

At the heart of the Galaxy S is a bright Super AMOLED display, measuring 4-inches diagonal – besting Apple’s 3.5-inch display in terms of real-estate, while still fitting in almost the same package size. Samsung also claims the display has “80% less reflection”, but I really don’t have anything to compare that to. Under most conditions, contrast and color saturation levels were visibly better than my iPhone 4, but unlike Apple’s Retina display, you can definitely see pixels on Sammy’s 800×480 screen, and browsing tiny type on the web requires that you zoom in if you really want to read it. For what it’s worth, I give a slight edge to Apple in this respect, but this is very much a personal preference. Trust me, won’t be disappointed with the Galaxy S’ screen. 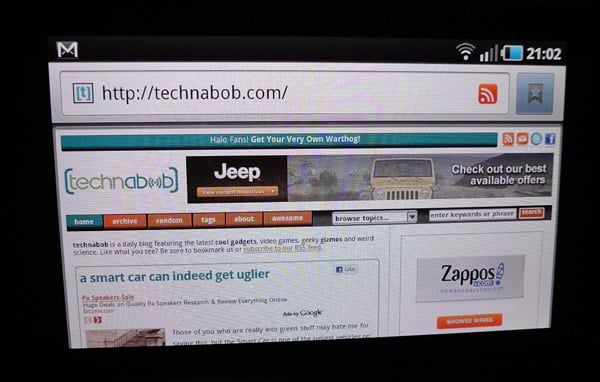 The touchscreen is as nice as any I’ve tried, and offers haptic feedback you can feel when you type on screen, which is nice, but doesn’t really add that much. I did test out the multi-touch display’s addressable area, and was pleased to see that it detected finger touches as close to each corner as I could test.

What I did notice immediately when I switched on the Galaxy S was how zippy it was compared to some of the earlier Android phones I tested out. Running a speedy 1GHz Samsung CPU, it was immediately apparent that this phone is one of the faster smartphones currently out there. As a matter of fact, it felt just a little more responsive than my iPhone 4 for most operations. And it seems to actually handle 3D games with aplomb. I had a chance to test drive Gameloft’s Asphalt 5 on the phone and it ran at a silky-smooth framerate. 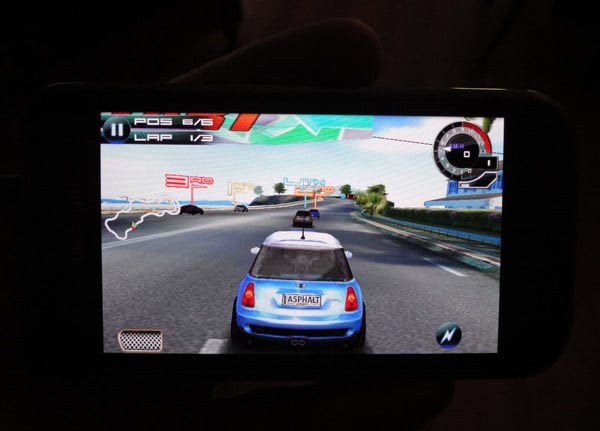 You’ll be able to find models of the Galaxy S with either 8GB or 16GB of internal memory, and can expand storage up to 32GB extra with a microSD card. From a connectivity perspective, you get tri-band HSDPA/HSUPA 3G data and voice, as well as Wi-Fi 802.11 b/g/n and Bluetooth 3.0 wireless. The phone also sports GPS, an accelerometer, proximity/light sensors and a digital compass. About the only bell or whistle this doesn’t have that the iPhone 4 does is the gyroscope.

In my tests, phone reception was solid – although I had difficulty getting a 3G connection from my home, and kept falling back to 2G. I’m reasonably certain that’s more of an issue with AT&T’s network than the phone itself though. That said, at the same time that I had no 3G connection on the Galaxy, I had one on my iPhone 4 (albeit just 1 to 2 bars). Voice quality through the earpiece is very good, but on speakerphone, it does distort a bit at high volumes. That said, it’s nothing you can’t live with.

The Galaxy S runs Google’s Android OS, and I won’t spend a whole lot of time going into Android itself. The phone ships with Android 2.1, which certainly is better than early versions of the OS, but only supports Flash Lite 3.1. Samsung has already revealed plans to bring Android 2.2 to the Galaxy S, along with full Flash 10.1 support, so it’s only a matter of time before that upgrade hits. In the mean time, you get a wealth of apps out of the box including a calendar, e-mail, web browser, contact manager, memo pad, and the Aidiko eBook reader, which looks an awful lot like Apple’s iBooks app. And of course, you’ve got easy access to the Android Market, which currently offers over 60,000 apps.

As has been the case for a while, Android includes the excellent Google Map Navigation, which provides turn-by-turn directions using Google Maps data, and can speak directions when you install the free, optional Text-to-Speech capability from the Android Market. 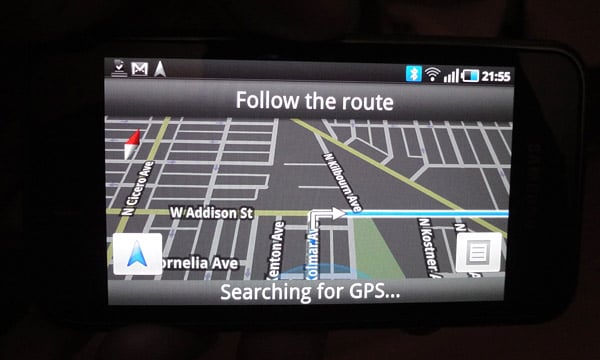 One thing to keep in mind is that Samsung conceals much of the standard Android UI behind their own “TouchWiz 3.0” menu system, which includes Samsung’s much-better-than-Android’s media player. I found TouchWiz to be a more natural transition coming from an iPhone, but if you’re a die-hard Android user already, you might find the menu system a little disorienting at first. There’s also no way to disable TouchWiz, so if you want Android’s standard UI, you’re out of luck. There have been some reports of TouchWiz adding mysterious lag to the user experience, but fortunately, I didn’t encounter any of this in my testing. 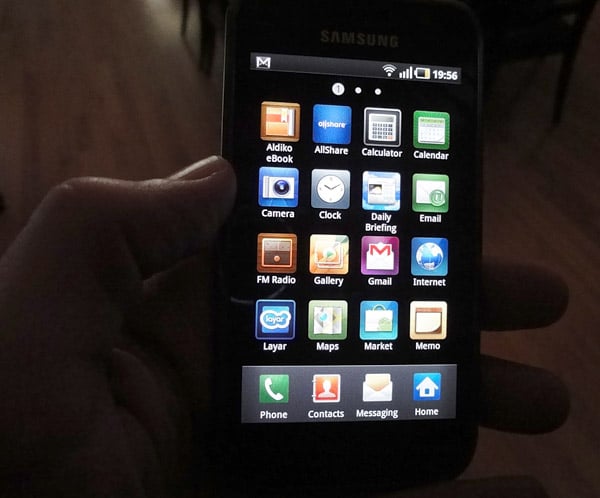 So, back to the hardware. The Galaxy S can shoot 720p HD video at 30fps, and there’s also a low-res front-facing camera for video chats, which work reasonably well on Wi-Fi or a solid 3G connection. While the HD cam performs admirably in daylight situations, I found the grain levels to be exceptionally high in all but the brightest lighting conditions. When shooting still images with the 5-megapixel digital camera, I had better luck, but still a decent amount of grain in most images. Here’s a sample still image for reference – taken under typical room lighting conditions. 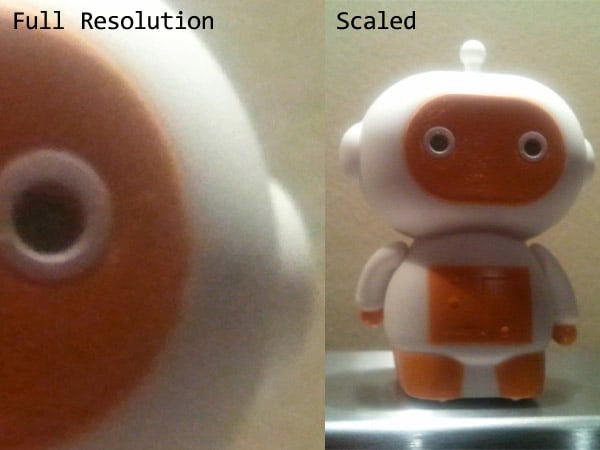 Keep in mind that the Galaxy S is loaded with real camera-like adjustments for exposure and a plethora of photo enhancement modes, so with a little practice, I bet you can get much better image quality than I managed to muster in my brief tests in the out-of-the-box image modes. That said, they left out two small, but useful features which really should be standard on phone cameras these days – there’s no LED flash, and no dedicated camera shutter button. I can live without the shutter button, but for indoor photos, I really missed the flash. 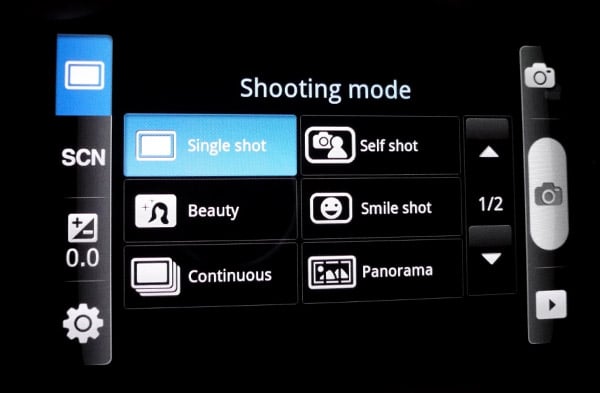 An added bonus over the iPhone, the Galaxy S has a built-in FM tuner, which does a nice job grabbing over-the-air radio, along with information display for stations that support RDS title and track information. And when I was scanning around the dial, I lucked out and got me some Foreigner. Carl would be so proud.

Probably my favorite feature on the Galaxy S is AllShare, which provides DLNA media sharing, so you can share your pictures, videos and audio either to or from other DLNA devices over your wireless network. I managed to stream a 720p video that I shot on the Galaxy to my 58″ Samsung plasma TV’s media player without a hitch. There’s something immensely satisfying about shooting a video, and then having it up on your big screen in seconds without wires or transferring files. You can also send files from your desktop computer to your phone’s screen. 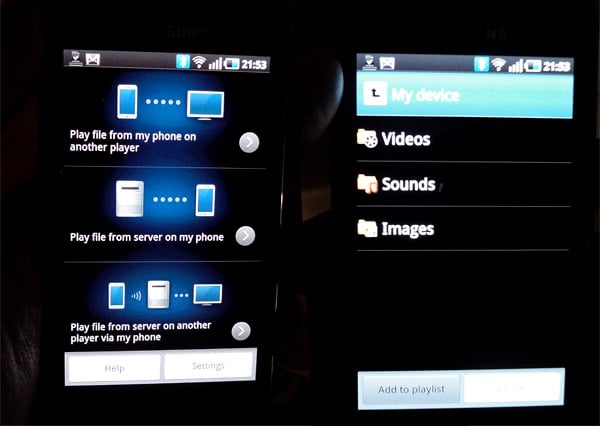 One area I didn’t really get to test thoroughly was battery life. Since I didn’t use the Galaxy S as my primary phone during this review, it’s hard for me to get a grasp on real-wold battery performance. I will tell you that the phone ships with a 1500mAh battery pack, and Samsung rates the phone at 393 minutes talk time on 3G and 803 minutes on a 2G network, which is comparable to the iPhone 4’s battery claims.

Overall, I’m pretty pleased with the Galaxy S. It’s definitely one of the nicer Android OS phones I’ve used, and it was zippy in performing all of the operations I tested. It’s got all of the features you’ve come to expect from a well-equipped phone these days, including a hi-res and front-facing cameras, HD video, 802.11 b/g/n support, GPS, Bluetooth, and even an FM radio. And I love that they didn’t dumb down the camera – including exposure controls and adjustments I’m used to seeing only on dedicated digicams.

My complaints are generally minor: the grainy low-light images – and no flash to help with that situation. Plus, I’d prefer a metal body instead of a plastic one, and the AT&T version is limited to 3G connectivity. I’ll be really curious to see Sprint’s 4G variant when it comes out. Also, if you’re into the standard Android UI, you’ll want to look elsewhere. On the other hand, if you’re thinking about moving over from an iPhone, your transition will be easier to this phone than some of the other Android phones out there.

For more info on the Galaxy S, and where you can get one, head on over to Samsung’s website.