Maelstrom: the Center of Epicness in World of Warcraft

Before I spread the good news, a little bit of Warcraft geography: at the center of the world of Warcraft (I’m talking about the place, not the game) is a gigantic rift, “a tumultuous storm of tidal fury and chaotic energies” known as the Maelstrom. To simplify things, there was once a major war, and the end result was that a huge pool of energy imploded and turned into the Maelstrom. Lands were sucked into the Maelstrom etc etc. So it’s kind of a black hole, right there at the center of the Warcraft world. Currently, WoW players cannot visit the Maelstrom, but in the coming expansion, Cataclysm, there will be a series of quests that will enable players to see the awesome sights. Here’s a shot of the Maelstrom in World of Warcraft: 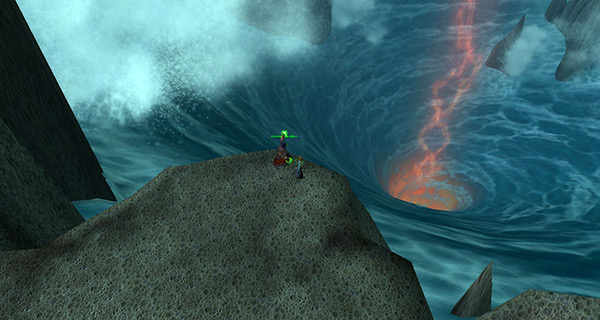 At this point most of us would say, “Wow. The Maelstrom sure is epic, it’s cool that Blizzard thought of including that in the expansion”. However, one smartass in the beta forums of World Of Warcraft actually complained that the Maelstrom was not epic enough. If you’re a WoW player, you better thank that smartass, because Blizzard responded with an epic sandwich. Players who visit the Maelstrom will be treated to this apparition:

Yes, it’s an Undead playing guitar on top of a T-rex that’s on top of a rocket-propelled, laser-shooting flying shark. Note how the dwarf orc couldn’t take the epicness so he threw himself into the Maelstrom. That’s Cataclysm for you folks.