Like the awesome RACER concept, the Robot Survival Games are real world matches but not directly between human players. Competitors use robots armed with airsoft guns; they control the robots remotely and use on-board cameras to help them navigate. It’s a lot nerdier than RACER because the competitors build their own robots, but I guess that’s part of the fun. Here are some of the combatants from the 2nd Robot Survival Games: 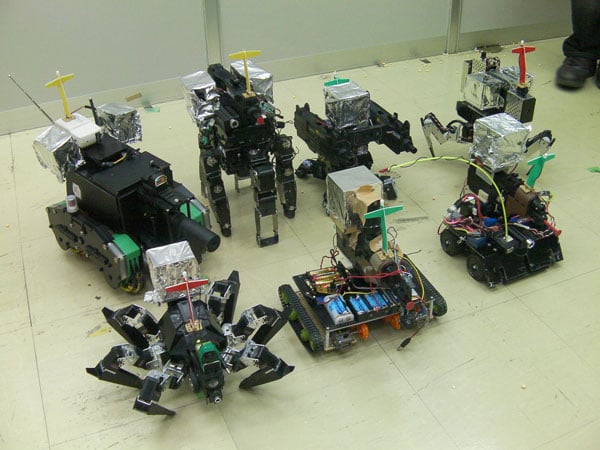 The tinfoil-covered box behind the robots is the weak spot. Inside the box is a light sensor, and as pellets tear the tinfoil off, the sensors receive more light. When the sensor has registered a predetermined amount of light, the robot is considered dead. Watch the clip below to see how a round plays out. I suggest you lower your expectations a bit, but do watch out for the robot on the right. He’s an absolute moron.

I’m really interested to see the how the robots are controlled. I wonder if it’s as simple or as fun as playing a video game, or if one needs a master’s degree in robotics to make the robots move.