If anything ever proved holding a high rank in any military the world over doesn’t mean you aren’t a dumb ass this does. Apparently, an error with a border on Google Maps has led to a bit of international scandal down in Central America. A Nicaraguan commander and his troop sauntered into Costa Rica along an area near San Juan Lake on the border between the two countries. 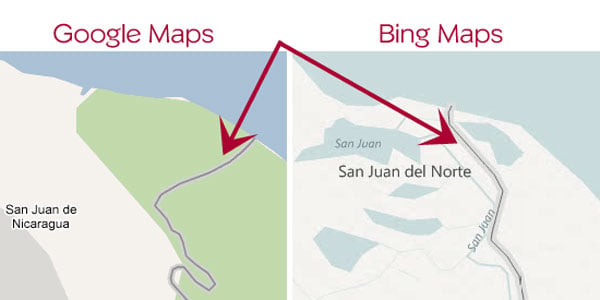 The troops then proceeded to remove a nearby Costa Rican flag and put the Nicaraguan flag in its place. Apparently, they then cleaned up a river that was nearby and dumped the junk they removed on Costa Rican soil.

The military commander then blamed the mishap on a Google Maps error. The Google Maps photo of the border area in the wrong place. I can see people following Google Maps to the wrong destination while driving, but invading a foreign country because you followed Google Maps is crazy. On second thought, perhaps this is how we can annex Canada to reap the benefits of cheap prescription drugs and an unlimited supply of moose jerky.