Rovio’s wildly successful iOS game has branched out to the Android Marketplace and Ovi Store, but the angry birds of Angry Birds are still looking for more of their green porcine archenemies. Starting this week, the game will also be playable on PCs via Intel’s AppUp center. 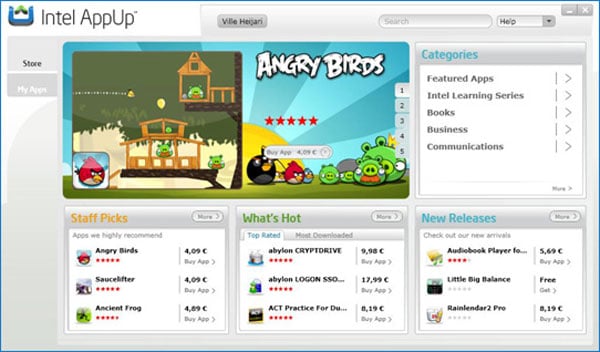 I’m not sure why Intel is touting their AppUp store as only for “netbooks and laptops”, but since the only system requirements they mentioned are Windows 7 or Windows XP, I think it’s safe to assume that Windows desktop users will be able to download and play Angry Birds as well. I’m also not sure why Rovio chose the relatively obscure AppUp instead of Steam to distribute their game.

As for PlayStation users, the game will be packaged as a PlayStation Mini, so you’ll be able to play it on both the PS3 and PSP. No word on how much Angry Birds will cost as a PlayStation Mini; on the AppUp it’s regular price will be $10 (USD), £6 or €7 depending on your market, but for a limited time it’s being sold at a special introductory price of $5.

I’m still waiting for Epic Games to port Infinity Blade for the PlayStation Move and the Kinect.