iOS 5 Notifications App Concept: Apple, Just Do Something About This Already

The notifications scheme on the iPhone and other iOS devices is one of the longest-standing, yet unaddressed complaints that users have. The current system is messy, distracting and obtrusive, which is ironic because Apple is all about designing hardware that gets out of the way. There’s a good chance that iOS 5 will be released this year, and with it an improved notifications system. But just in case Apple is still figuring out how to fix it, Andreas Hellqvist has a few great ideas: 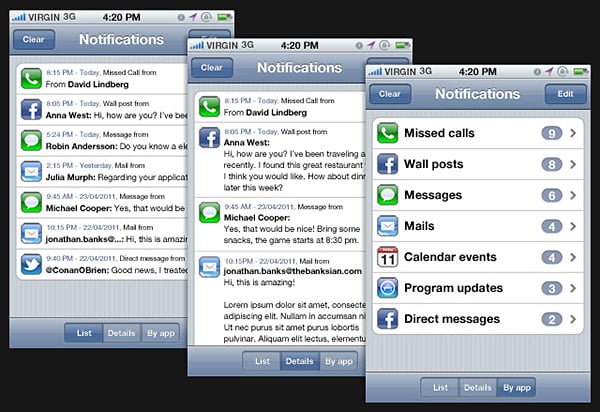 Hellqvist’s concept Notifications app for the iOS has a number of great things going for it. Just the very fact that it lets users view all notifications in one place gets a big check mark from me. As you can see in the picture above, going into the app itself lets you view and sort the notifications via list or detailed format or by app. But there’s a lot more to the concept than that:

Granted, you can already emulate some of these features using existing apps like Lockinfo and Notified, and to a small extent BiteSMS. But those apps require you to jailbreak your iOS device and obviously fork over some cash, however cheap each app may be. Besides, Apple should be the one to take care of this because its a fundamental flaw of their product.

I think Hellqvist has a lot of great ideas here, although ironically I think his app risks being messy and unwieldy as well in practice, especially the lock screen display. Also, I don’t think selecting a notification should lead to a direct action right away, like in the video where selecting a missed call notice causes the phone to dial the caller, because I can see that happening accidentally way too often. Perhaps there should be a “more info” screen before the user is given the option to take action. Overall I’d still rather have his app than the default scheme. You can check out the blog that Hellqvist set up for his concept for more info.