iTunes Costs $1.3B to Operate Each Year (Estimated)

I would bet that many people out there have purchased music or apps from iTunes at some point. Even if you don’t use the iPhone, iTunes is still the most popular digital music store around. I know that Apple keeps a chunk of the money that sellers make when they offer apps and music on iTunes to cover costs but I really had no idea what those operating costs could be.

Apparently, it costs a ton of money to operate iTunes. We know that there are 15 billion songs downloaded on iTunes, 130 million books downloaded, and 14 billion apps downloaded along with $2.5 bill paid out to developers.

Along with that data, market intelligence firm Asymco took some other figures, worked the numbers, and came up with what it thinks iTunes costs to operate. The number is a whopping $1.3 billion each year. That works out to about $113 million monthly! That is a lot of money no matter how you slice it. 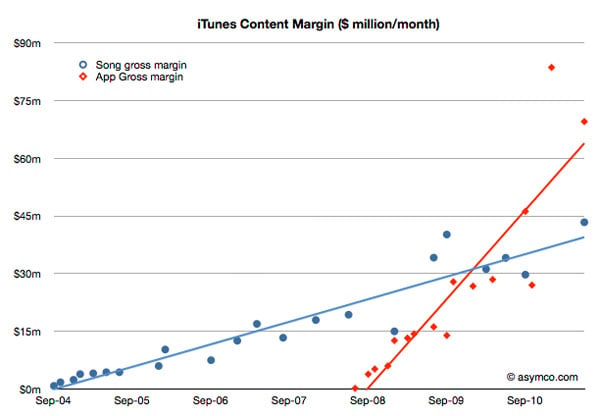 In working through their estimates, Asymco figured out the what Apple gets to keep after paying content owners (shown in the graph above), then assumed that they operate at break-even, since Apple has stated that they really make their money on the hardware business, and they have alluded to the iTunes store operating “a bit over break even” on several occasions.

It doesn’t seem like offering digital goods where you don’t have a physical store should cost that much.