…not officially anyway. Arthur Nishimoto, a graduate student at the University of Illinois’ Electronic Visualization Laboratory (EVL), is currently working on a touch-based real-time strategy game based on the Star Wars universe. The rest of us will probably never be able to play it though, mostly because it’s for research, but also because it requires a huge touchscreen to play. 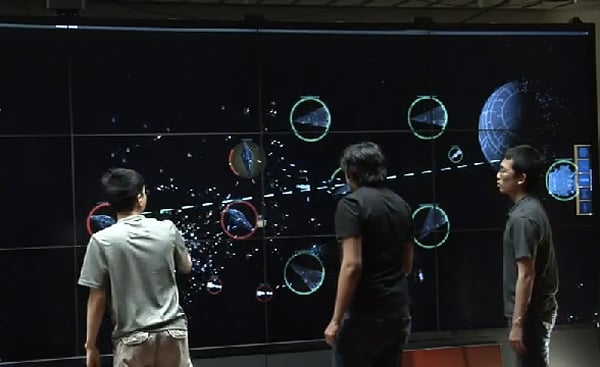 Nishimoto calls his game Fleet Commander. He began making it back in 2009, when he conceptualized it as a table top game based on the TacTile, a 52″ touchscreen. Nishimoto’s main goal was to create a strategy game with a touchscreen interface that was both intuitive and comprehensive. The trick? A radial menu that pops up around ships. Here’s the game running on the TacTile:

Although Nishimoto created all of the art himself, they are exact recreations of Star Wars ships. There are fighters, bombers, capital ships and of course the Death Star. Turning the fandom knob up to 11, he also used music and sound effects from the movies. Last year, Nishimoto moved his project to a much larger system – the CyberCommons, the EVL’s 20-foot, 8160 x 2304 display:

As you can see, the game lacks several basic elements of the RTS genre, like base-building and resource management, so for now it’s mostly Star Wars ships battling it out. Not that I’m complaining. Maybe in the future Nishimoto will have the opportunity to create an official game for tablets, but for now we’ll just have to keep watching that video over and over again. Check out Nishimoto’s website for more details on Fleet Commander as well as his other video game projects.