Rollerskating Robot Chariot is the Rickshaw of the Future

What do you get when you combine robots, roller skates and a chariot? The Solar Electric Robot Chariot of course. Can robot chariot races be far behind? That I want to see. 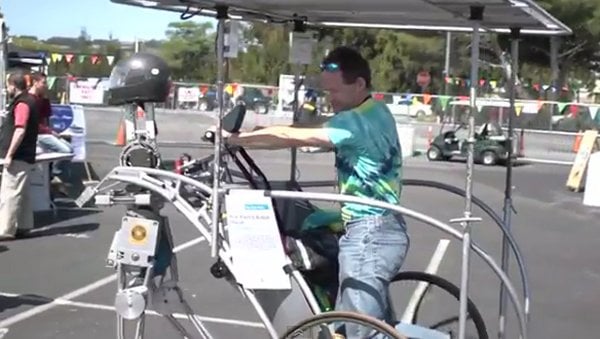 This strange robotic hybrid (or should I say tri-brid?) comes from Bob Schneeveis and Grant Grundler, two guys who envisioned a lower torso (with a sort of neck and helmet on top) pulling you on a chariot while said lower torso skates around like a slow roller derby zombie. This monstrosity is powered by the Sun. The roller skate-like wheels are actually there to lengthen its stride and make it more efficient.

The whole thing is almost entirely out of metal and I have to say, it looks pretty cool doing what it does. Now if we can get a whole bunch of these in our cities, pulling our lazy butts around, we would be one step closer to the robot future we were promised.