Do you guys remember those awesome TRON lightcycle motorcycles from Parker Brothers bike customizers? Well they’re back, and this time they’ve done away with the old gas-and-oil-guzzler and replaced it with something much more likely to exist in the world of TRON – an all-electric drive-train. 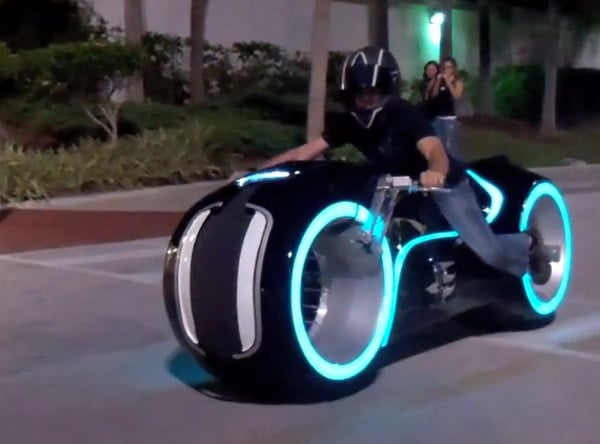 The new all-electric TRON lightcycle is driven by a 96-volt electric motor, powered by a bunch of lithium-ion battery cells. The bike is able to hit a top speed over 100mph, and can go for about 100 miles per charge (and a charge only takes 15 to 35 minutes). Of course, it also features authentic TRON illumination with the flick of a switch. Check out some footage of the electric lightcycle tooling around a shopping mall parking lot, as well as a brief glimpse at the bike’s internals in the video below:

Parker Brothers says they are intent on making the bike street-legal, but it’s not designed for heavy duty use – so don’t expect to get in a light bike race with evil CLU and expect to beat him if he’s still on a petroleum-powered bike. For more info on the electric TRON bike, head on over to parkerbrotherschoppers.com or give them a buzz at 321-215-5116.