If the mobile phone or smartphone you have right now really sucks and you want a new device, AmazonWireless has a killer deal you need to check out. The smartphone is the Motorola Droid Bionic, which is one of the latest offerings from Motorola. The phone is 4G LTE capable and works on the Verizon network. 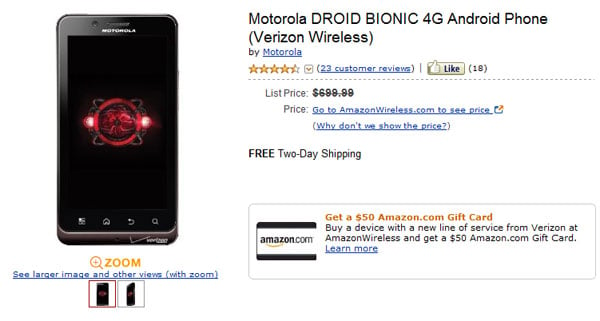 The phone has only been out for a few weeks now and when it landed, the price was about $180. As of today, Amazon has discounted the smartphone significantly. The phone sells for $149.99 and then you get a $50 gift card as well. That makes the total cost under $100 for one of the coolest Android smartphones around. Of course, you’ll need to activate a service contract with Verizon to get the deal.

If you aren’t familiar the Droid Bionic runs Android 2.3, has 4G connectivity, a 4.3-inch qHD screen, GPS, WiFi and a lot more. The phone rocks a 1GHz dual-core processor and can be used as a hotspot on the go. Internal storage is 16GB and the phone has a 16GB microSD card too.