This is the most awesome, intense, realistic (and painful) video game simulator I have ever seen. It’s not a fancy driving or flight simulator; this is a simulator for FPS games. It looks like you could train real soldiers in this thing. The dome screen uses five HD resolution projectors and a lot more. 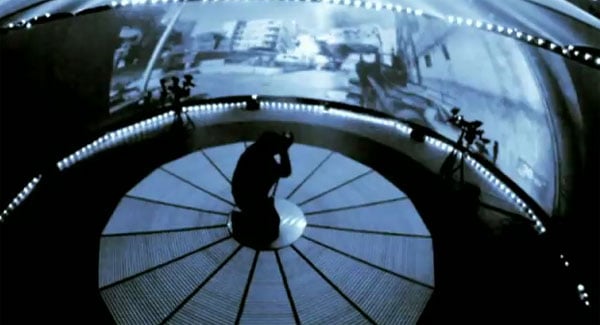 The Ultimate FPS Simulator rig was set up for UK Channel 5’s The Gadget Show. Those projectors surround the player with life-size images of a game, in this case, Battlefield 3. The player has a gun in hand that fires the virtual bullets and they are free to move around the game by actually walking.

In the center of the room is an omni-directional treadmill that controls where the player moves to on the screen. Then the player crouches, the view on screen crouches and so forth. The wildest part is if you mess around and get shot in the game, the simulator shoots you with a paintball gun so you feel the pain.

If you happen to live in the UK, tune in to Channel 5 on October 24th at 8pm to see more of the Ultimate FPS Simulator rig in action.