Real-life Forge Patrick Priebe wowed and nearly blinded us with his palm-mounted laser. Now he’s back with another hand part-mounted doer of harm – a wrist-mounted crossbow gauntlet. 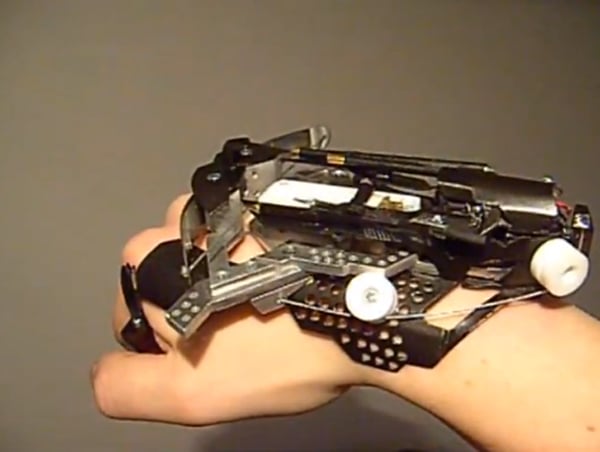 Patrick says that all of his wristbow’s parts are homemade. It even has a laser sight, which is powered by two AA-batteries which are tucked on his palm along with the laser sight’s toggle. The wristbow’s bolts are made of carbon fiber tubing with brass and steel tips, although crossbow connoisseurs might balk at his bolts because they have fletching – the feathery things near the back of the arrow – which bolts are not supposed to have. Watch the not-bolts and the wristbow destroy things in the video below:

That’s an ultra-silent crossbow. It didn’t make a sound even when it hit the can! Oh. Yeah, yeah I knew that there really was no audio the first time around. Heheh. Heh. Patrick says he’ll make an instructable soon so that Deus Ex fans can augment their cosplay with their own wrist-mounted crossbow. Who knows, maybe Patrick will even accept custom orders like he does with his other creations.