A Florida Highway Patrol trooper was attacked in Orlando early Thursday by the Lord of the Sith, Darth Vader. Or at least a man wearing a Darth Vader mask. Had it been the real Vader, it would have ended with the officer being force choked. Instead it ended badly for the faux Sith Lord. 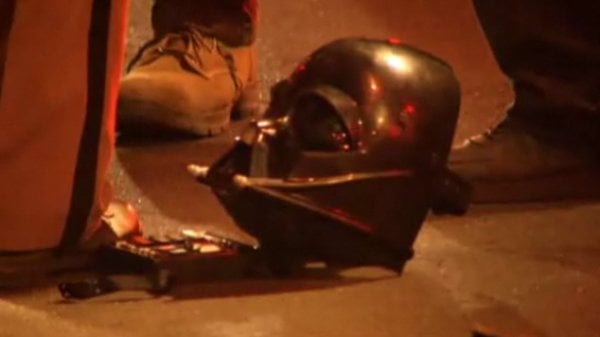 The police received reports of an intoxicated man wearing a Darth Vader mask and walking in the middle of a road near Summerlin Avenue and Anderson Street. The trooper arrived on the scene and asked him to get out of the road several times. At this point I can only assume that Lord Vader told him that he found his lack of faith disturbing, before cursing at the trooper and laying in the roadway. Presumably in an attempt to summon up his force powers.

The trooper then told him to get up, but instead he punched and kicked the trooper, who deployed his Taser. Supposedly the suspects thick jacket prevented the Taser from working, (Our was it the fact that he is more machine than man?), so the trooper used pepper spray to subdue him.

The Light Side always wins.