R2-D2 Apron: There’s a Droid in the Kitchen

R2-D2 was a very versatile droid, but throughout all the Star Wars saga, I don’t ever remember seeing him cooking. Even though the little droid has his own BBQ meat smoker, soy sauce dispenser and pepper mill, he’s still never in the kitchen. But that doesn’t mean that cooking wasn’t among his many talents – it’s just that everyone was too busy fighting the Empire and the Sith to stop and chow down. You, on the other hand, occasionally need to stop to cook something, and what better way to do it than wearing this spectacular R2-D2 apron. 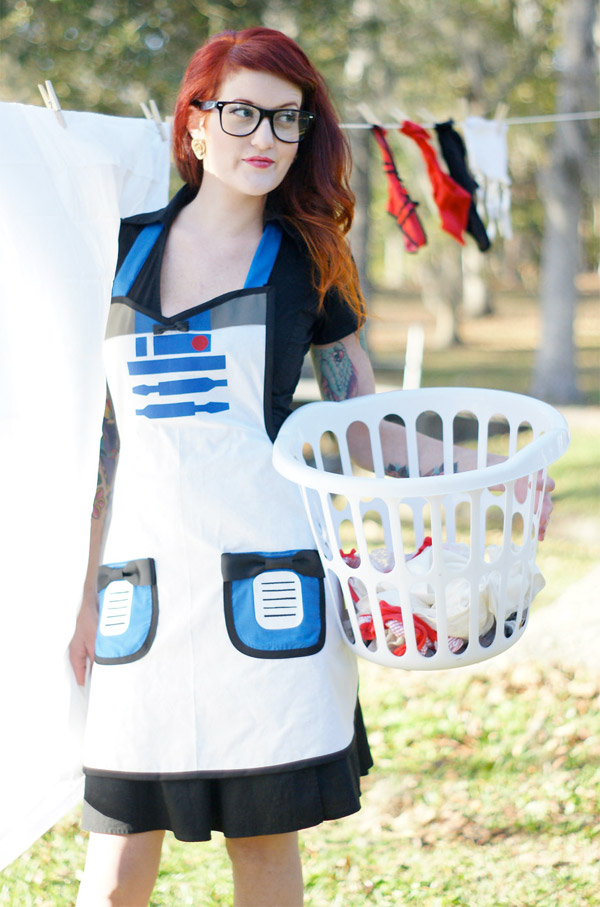 It’s made by Etsy contributor HauteMessThreads, and perfectly captures R2’s key attributes, while still being completely serviceable as an apron. While I’d say that either a guy or girl could wear this, I think the little bows, cinched waist and v-neck make it more appropriate for girly geeks than the boys. I think it’d take a really confident man – I’m talking Boba Fett confident – to pull this thing off.

Each apron is handmade to order, and is crafted from 100% cotton, with blue and black accents. The R2-D2 apron sells for $70 (USD), but if you want an XL, you’ll need to chip in an extra 5 bucks. It’s available for order over on Etsy. C-3PO is also available, but I’d say he’s not quite as awesome as R2, which is too bad, because I always envisioned 3-PO as some sort of robot butler who would do my bidding and cook me up a nice wampa steak.