Would You Like Some Bio-Fries With Your Test Tube Burger?

A while back, scientist Mitsuyuki Ikeda told the world that his burger patties synthesized from human poop could help alleviate the impending food crisis. Suffice it to say, the idea didn’t really appeal to many people’s palates.

Now another scientist, Mark Post from Maastricht University, has been hard at work creating faux burgers, only these aren’t made from poop. Rather, they’re modified foods “grown” from stem cells that have been stripped from the muscles of cows. 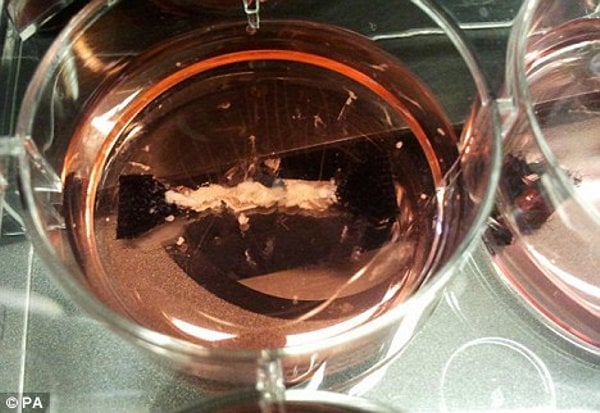 He began with mouse burgers, moving on to rubber squid strips and scallop meat before settling on burgers. Thusfar, the lab has produced a small sample strip of beef, but it is currently “pinkish to yellow” in color.

At the American Association for the Advancement of Science’s annual conference in Vancouver, Professor Post announced that his test-tube burgers will properly colored and ready to eat within a few months. Post says: “We are going to provide a proof of concept, showing that out of stem cells you can produce a product that looks like and feels like and hopefully tastes like meat. Seeing and tasting is believing.”

While the end result might look and taste like ground beef, it’s unlikely that more complex forms and textures like steaks and chops will be as easy to pull off. There’s no doubt that this technology might result in change on agriculture and livestock production. But the biggest question is, would you want to eat genetically-engineered burgers?