The evidence that Japan is working on making giant robots real continues to pile up. Naoki Maru is known in Japan for his King Kizer series of robots, has developed a motion-controlled version that he calls Real King Kizer. We’re one step closer to Daimos and G Gundam! Or at least toy versions of them. 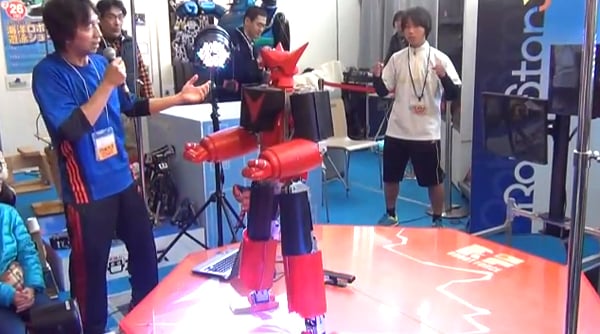 Naoki and his son use their King Kizer robots to compete in Robo-One, a league where bipedal humanoid robots compete in various categories including combat. He’s already tried several ways of controlling his robots, but the movie Real Steel inspired him to come up with a similar interface. Naoki used ASUS’ Xtion Pro Live sensor, which is basically the PC version of the Kinect. The video below shows the Maru father and son showing off Real King Kizer to kids at a robot festival in Osaka.

The lag is horrible, but I’m still floored. I’m sure you can see that the applications of this technology extends beyond mere toys and entertainment, like robots that can be controlled to perform tasks that are dangerous or impossible for humans, but without the user having to learn to operate a complex interface. Or you know, super robots.  What’s next Japan? Gundanium alloy?

[via The Verge & Robots Dreams]