NAO Robots Programmed to Collaborate: Next Up, Forming a Giant Super NAO Robot

If robots and humans are to work together, we need to destroy all copies of The Matrix, The Terminator and other media portraying robotic uprising. That’s the first thing we should do. Only after we have done that should we expand on the experiments being done in the Jouhou System Kougaku (JSK) Lab of the University of Tokyo, which involves teaching robots to work together. 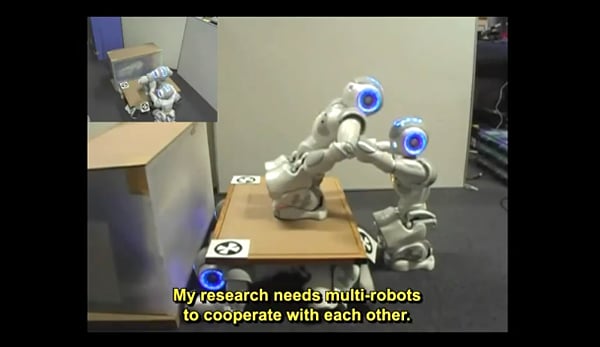 Using Aldebaran Robotics’ NAO humanoid robot as their platform, researchers at the JSK Lab have come up with several ideas to make robots help us and each other. These ideas include a navigation and exploration system that is shared between multiple robots, robots that can learn to work together by trial and error and robots that can reach or avoid moving objects based on their awareness of their own motion relative to another moving object.

There’s also an experiment involving a soft exterior sensor – basically a skin for robots, so they can safely interact with objects and our fragile fleshy bodies. Watch the video to see a few practical examples of these experiments:

Clearly that dude in the throne being carried by the other robots is their leader. He seems like a douche. We’re doomed.