Space Shuttle Discovery Lands in Washington After its Final Flight

The retired space shuttle Discovery took its final flight atop the back of the modified Boeing 747 that has moved to the shuttle between locations over the decades. NASA loaded Discovery on the back of the 747 earlier this week in preparation for its flight to Washington where it will spend the remainder of its days. 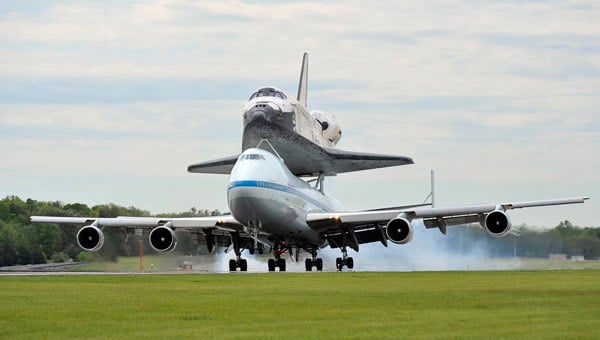 Discovery will be displayed at the National Air and Space Museum. During its final flight, the 747 circled monuments in Washington while crowds of people on the ground looked on. “I tell you, it made the tears come. I stood there for three or four seconds and just began crying,” said Patricia Rensch of Arlington, Va.

It’s really sad to think that Discovery has flown for the last time. At the same time, it’s exciting to think that if you take a trip to its new museum home, you’ll be able to see it up close and personal. The coolest thing is that for at least a short time both the Discovery and the test shuttle Enterprise will be in the same place. The Enterprise will eventually be moving to the Intrepid Sea, Air and Space Museum in New York City.