For months now there have been rumors going around that the next iPhone would be a drastic departure from its predecessors. Then came the pictures of what seemed to be the back cover of the yet unannounced handset corroborating the rumors. Now we have a video of said back cover. It’s pretty much what it looks like in the pictures, including that annoying new dock connector. 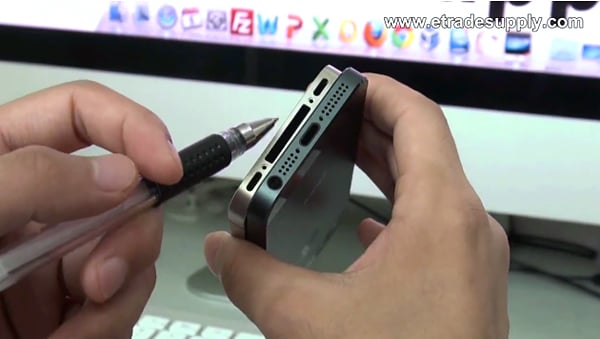 The video was uploaded by the folks at ETrade Supply, a retailer that specializes in mobile device spare parts, so much so that they have parts for devices that don’t officially exist yet. As you can see, compared to the iPhone 4S this alleged new iPhone has its headphone jack moved to the bottom, next to wider speaker grills and a much smaller port, indicating that the current iOS charge and sync cables won’t work with this new device.

It also seems like the case will also serve as the battery cover, as opposed to the iPhone 4/4S design that had a separate battery cover. Also of note is the smaller SIM card port.

If Apple really is abandoning the current dock connector I hope it at least sells (or bundles) a cheap adapter for the current chargers and accessories. I also hope ETrade Supply uploads a video of when the cops storm into their office.

[via ETrade Supply via Gear Live]