If you have a Special Ops team that needs to disguise themselves as contractors, they are going to need some weapons right? This Dewalt drill handgun is perfect for the mission. It looks like a drill, but this drill makes holes with bullets not bits. 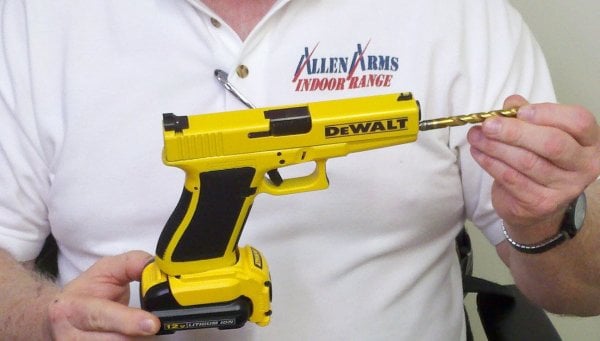 This Glock 21 .45 caliber handgun is in disguise since it has been modified to look like a DeWalt cordless drill by the guys at Allen Arms in Greenville, South Carolina. They even completed the illusion by mounting a drill bit on the front of it. However, it is a fully functional weapon. If you have one of these in your toolbox, then you just might be the manliest man ever, since it’s both a gun and a tool.

Too bad you can’t fill the mag again by putting it in the charger, but no stealth tool/gun mod is ever perfect.