If you follow space and science at all, or watch the news, undoubtedly you would’ve heard by now that NASA was successful in putting the Curiosity Rover on the surface of Mars yesterday. NASA has released a cool photograph of the Curiosity rover taken by the Mars Reconnaissance Orbiter. The photograph was taken as Curiosity was still attached to its parachute is descending through the atmosphere of Mars. 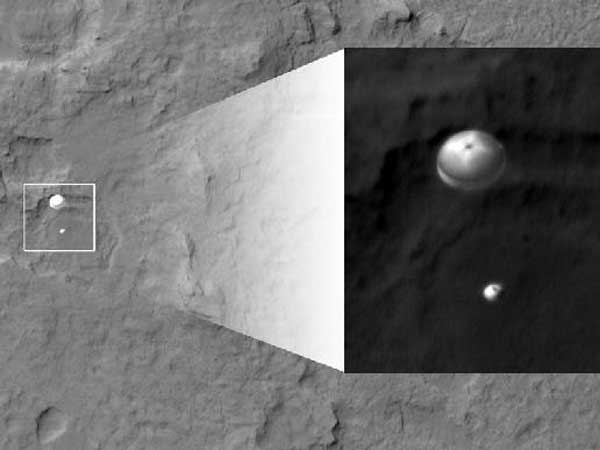 The photograph, which you see above, was taken at an angle by the Mars Reconnaissance Orbiter. Since the photo was snapped at an angle relative to the surface of the planet, the intended landing zone near Mt. Sharp doesn’t appear directly below the Rover. You can tell from the photo that the parachute was open and performing exactly as NASA scientists intended.

It’s amazing that the photograph, taken from orbit, clearly shows the massive hole in the center of the parachute and the darker band around the parachute. You can’t see the wires connecting the Curiosity and its sky crane to the parachute in this image. When the MRO snapped this picture, it was 211 miles away from Curiosity.