It’s more the little sad to many fans of space travel in the US that the space shuttle program has been retired. Right now American astronauts have no way to reach the International Space Station or leave Earth other than catching a ride with astronauts from other countries on their spacecraft. Another depressing final milestone in the shuttle program has been met this week with the last multiple shuttle shuffle of the program. 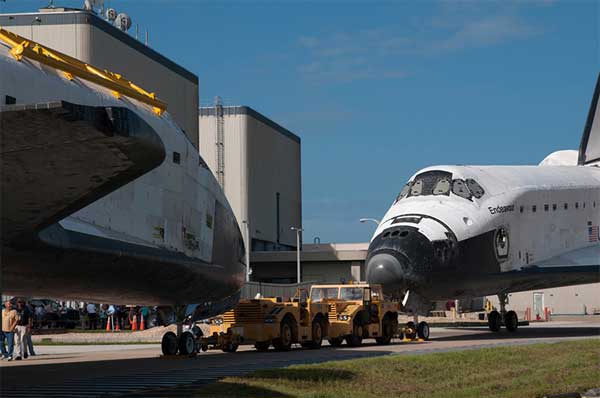 The space shuttles Atlantis and Endeavour met nose-to-nose briefly for the final time for photos as they were moved between the vehicle assembly building and orbiter processing facility at Cape Canaveral in Florida. Atlantis was moved for the final time to be transformed from a flight-ready shuttle to a display to be put into a museum.

Presumably, the transformation has to do with removing any potentially hazardous materials from the shuttle. Atlantis should be delivered to the Kennedy Space Center visitor complex where it will spend the remainder of its days starting this November 2. Endeavour will end up at the California Science Center once it’s made museum-ready.