Yesterday marked the launch of a new service from Valve with the beta of Big Picture mode for Steam. Big Picture mode is a version of the Steam digital delivery platform designed to operate on big HDTVs rather than smaller computer monitors. The new mode will allow users with high-end media PCs connected to the TV to get higher quality graphics in the living room than they can with their consoles. 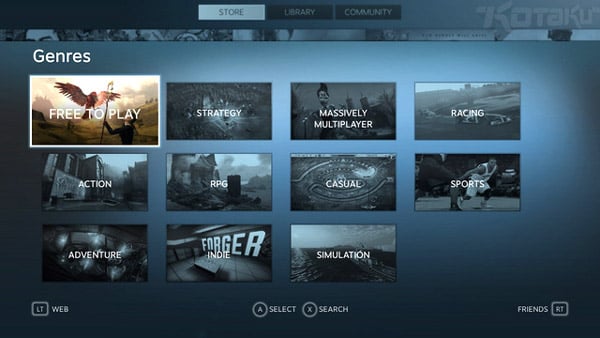 Despite numerous rumors to the contrary, Valve does not intend to launch its own game console any time soon. Rather the goal was apparently to make PC gaming more accessible and convenient in the living room. I’d love to have some of my PC games on my massive projector screen and this new Big Picture mode will make that easier than ever.

Big Picture mode looks sort of like the dashboard on an Xbox 360 or on other set-top boxes. You can use it to purchase games, surf the Internet, and chat with friends using the standard in-game overlay. Naturally, Big Picture mode has fonts, icons, and menus optimized for viewing on a big screen. The mode is also designed with prompts that can be used via a game controller from across the room, and even has a special keyboard mode optimized for game controllers. As a matter of fact, they recommend the Xbox 360 Controller for Windows, or the Logitech Gamepad F710 for gameplay and controlling the interface.

PC users can opt into the Big Picture beta now. There’s no word yet on when the Mac version will be available, though Valve says it’s “coming soon.”