Finger-Mounted Sensor & Camera: You Got the Touch

The explosion of touchscreen devices have not made the mouse obsolete. But what if you could use your finger as a mouse on any surface? That’s the point of Magic Finger, a concept device made by a team from Autodesk Research and the University of Toronto that can sense touch, motion and texture. 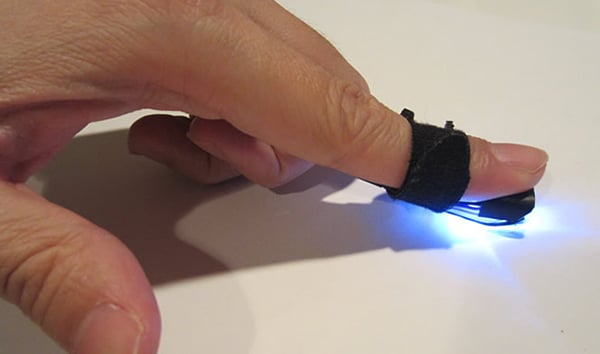 The Magic Finger is basically a micro RGB camera, an LED and an optical mouse sensor cobbled together. Talk about ripping off the mouse. Contrary to its name, the magic here seems to be in the software. Aside from letting you point and click on any surface, the camera can also recognize different textures, which the researchers use in a variety of ways, such as reading data, launching applications and controlling other devices. Watch the dorky demo in the video below:

I’m not too sold on the Magic Finger for a couple of reasons. First of all the Magic Finger is intrusive; the finger or hand wearing the device will be of limited use because you don’t want to damage the Magic Finger. Second, I don’t think the data matrix or the Morse code transfer is practical. That said, the shortcuts and its use as a mouse could be very practical. Perhaps those two functions could be integrated in a less intrusive device like Google Glass or Digits.

[via Autodesk Research via MAKE]