Thanks to the Internet, the “office” is no longer a strictly physical location. I’m working from home right now, wearing clothes that even a bum would find distasteful. Despite this awesome setup, we can still do better. Maybe in the future we’ll all have proxy robots that can not only let us communicate from thousands of miles away but also move or interact remotely. We’ve seen a few glimpses into this future, but for now the Kubi is what we have. It’s either this or an intern carrying a tablet around. 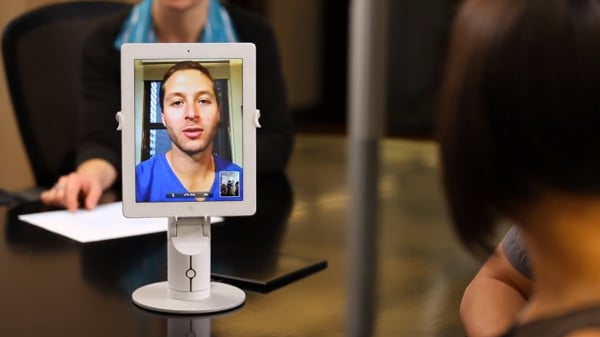 Made by Revolve Robotics, the Kubi accepts a considerable compromise from the prototypical telepresence robot. It’s a glorified tablet stand, i.e. it can’t drive about on its own. But while it doesn’t have feet or wheels, the upper part where the tablet is mounted can be controlled remotely by the user to pan and tilt, acting as a remote neck – in fact kubi is Japanese for neck. You think I misspelled my title didn’t you?

Like this telepresence robot, the Kubi uses tablets as its display and camera. That makes it more affordable and practical for ordinary folks.

It’s not exactly a surrogate, but if you’re sold, a pledge of at least $199 (USD) on Indiegogo gets you a Kubi unit. Note that the fundraiser is a “flexible funding campaign”, which means that your pledge will be deducted whether or not Revolve Robotics meets its projected goal of $200,000. Edit: There’s good news for those who are thinking of backing the Kubi in order to reserve a unit. As Revolve Robotics CEO Marcus Rosenthal mentioned in the comments, if for some unfortunate reason they are unable to deliver a backer’s Kubi the backer’s contribution will simply be refunded.