Comet ISON Could Outshine the Moon – If It Survives the Sun

Next year could be a very good year for watching comets. A comet was discovered this past September that is expected to fly within 1.2 million miles of the center of the Sun on November 28, 2013. If things go well, as the comet approaches the Sun, its heat will begin to vaporize the ice in the comet’s body creating a spectacular show in the heavens. 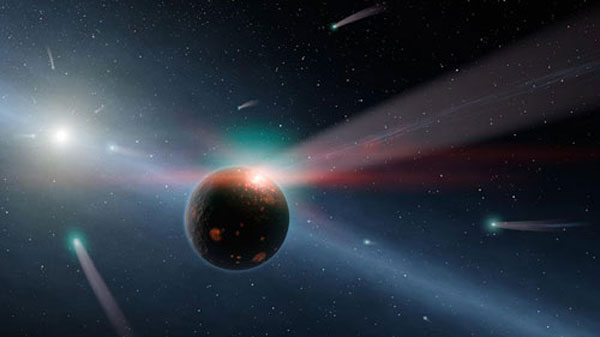 Comet ISON comes from the Oort Cloud, which is a cluster of frozen rock and ice that circles the Sun about 50,000 times further away than Earth’s orbit. Every so often material from this cloud breaks free and begins a long trip towards the Sun. Astronomers say that ISON’s path is very similar to a comet that passed the Earth in 1680 that was reported to be so bright it could be seen in daylight.

However, there is a chance that the comet might not survive its brush with the Sun. According to NASA, the comet could break apart as it nears the Sun or fail to produce the tail of particles we hope will be visible from the Earth. If that happens, legions of skywatchers around the world will be sorely disappointed.

Assuming the comet survives, researchers believe that ISON would be visible in the nighttime and early morning sky with the naked eye between October 2013 and January 2014.