I’ve been exceptionally unhappy with SyFy over the last week or so after hearing that they canceled Alphas. It looks like they’re trying to get back on my good side with a series called Defiance. Along with the new science fiction series also comes a video game from developer Trion World with the same name. The game is a first-person sci-fi shooter and what happens in the game promises to impact the storyline of the series. 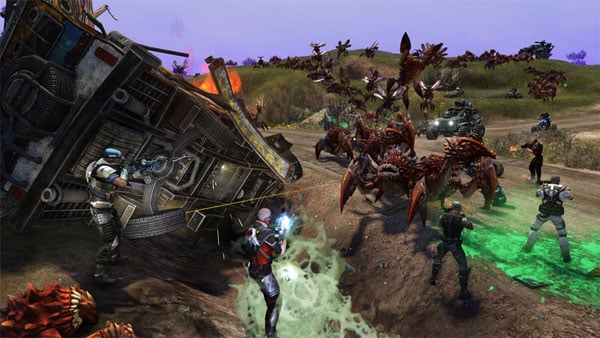 The video game went up for pre-order this week with various versions available starting at $59.99 (USD). The standard version pre-order includes an invite to the Beta for the game, a three-day XP boost, and a pre-order weapon along with other goodies. A deluxe digital version will sell for $99.99 and include all of that, plust a 30-day scrip boost, increased inventory space, rocket launcher and shield upgrades, and a bunch of other special goodies.

Console versions include The $99.99 Collector’s Edition of the game, which comes with a fancy box, Hellbug figuring, special weapon, a making of DVD, soundtrack and a bunch of other stuff. The Ultimate Edition of the video game will sell for $149 and will be offered only at GameStop. This version of the game includes everything in the Collector’s Edition, plus a  messenger bag, extra in-game title, a lock box, and a one-year season DLC  pass.

The Defiance TV series is set to premiere on Monday, April 15 at 8pm Central on SyFy. The video game is also set to launch in April and will be available on the Xbox 360, PS3, and PC.