For a long time, laser weapons were the stuff of science fiction, but researchers have able to create viable laser weaponry over the last several years. Boeing and the U.S. Air Force flew the Airborne Laser Testbed for a long time before scrapping the project last year. That massive laser was in the nose of the Boeing 747, was used to destroy missiles in flight, and could be an offensive weapon. DARPA has now announced that it wants to put significantly smaller laser weapons into turrets on jet fighter aircraft next year. 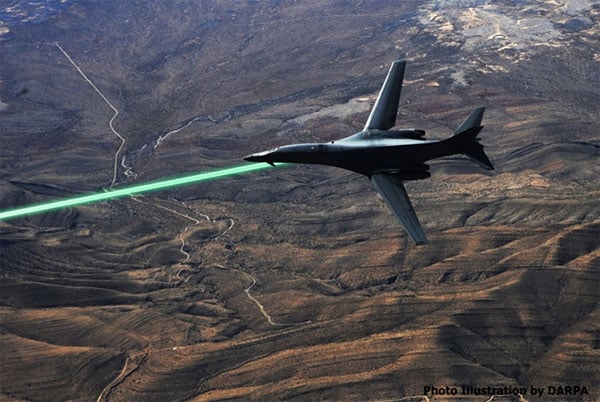 The HELLADS would be a 150-kilowatt laser approximately 10 times smaller and lighter than current airborne laser systems. The project aims to create a laser weighing under 5 kg per kilowatt that could fit into a total space of only 3 m³. The ABC is a weapon that could be mounted on aircraft to shoot down incoming missiles behind an aircraft. It would use technology to allow it to maintain effectiveness while shooting through the turbulent air behind an aircraft in flight.

And if you think that the illustration above seems far-fetched, think again. It’s the rendering that DARPA themselves has been circulating for HELLADS.

[Military Aerospace via Gizmodo via Dvice]