As much as I love playing FPSes on my Xbox 360 and PS3, they’re still not as immersive as they could be on my “puny” 64-inch plasma display. But thanks to simulator technology developed by UniVisual Technologies, you could soon be playing FPSes in an incredibly visceral gameplay arena. 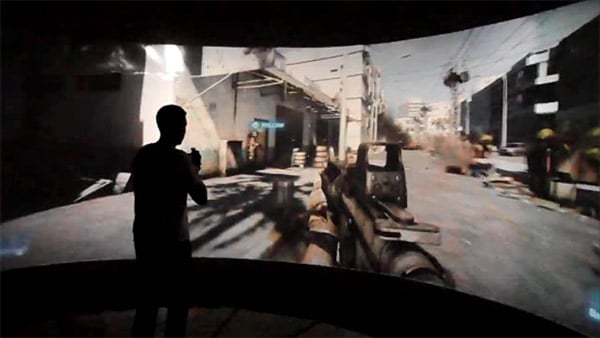 Combining their projection and image warping technologies with a custom 360-degree screen and a 360-degree treadmill from MSE AB, the simulator is able to surround game players with an immersive image that covers their entire field of vision, while at the same time allowing them to actually walk and run through the environment. 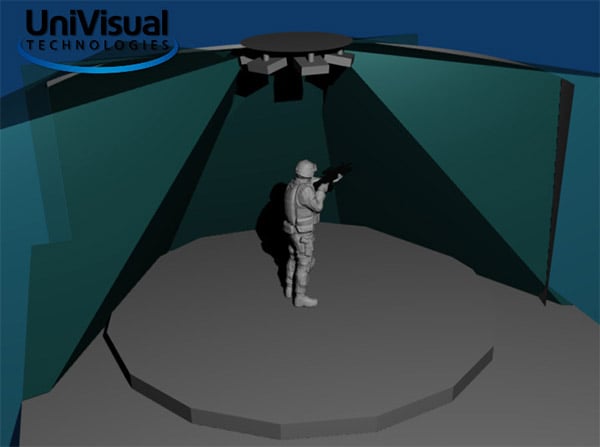 The 360-degree setup uses an array of six HD video projectors with short-throw lenses, which have had their images seamlessly blended together and warped using UniVisual’s sophisticated Warpalizer software to match the large curved screen, and to eliminate any areas of overlap, color or brightness distortion. (Check out a cool demo of Warpalizer in action here.) 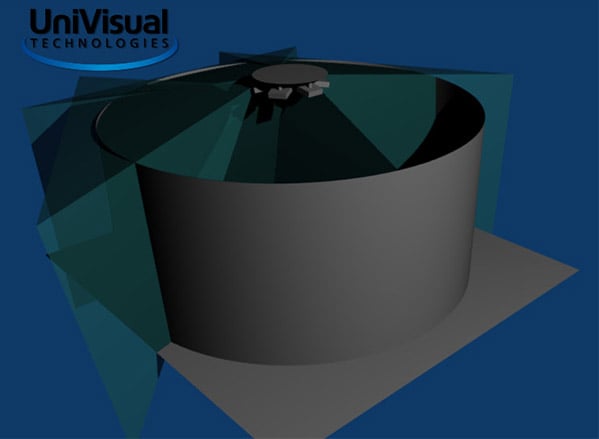 Under foot is a 3-meter circular treadmill system which determines which way to move based on the player’s foot movements and the game moves its viewport based on the direction of the wireless motion sensors in the gun. Incredibly, the entire system is powered by a single computer running a sub-$500 ATi Radeon HD 5870 Eyefinity 6 card.

While similar simulators have been shown off before, UniVisual claims their system is the most complete, cost-effective and ready for market, having already installed one in Mumbai, India for Smaaash Entertainment Center, who expects to launch more centers around India, and possibly abroad down the road. Check out the Mumbai installation in action in the video clip below:

Very cool. Though I wish that they could figure out a way to hide the giant gun reticle in Battlefield 3 to make the environment even more realistic. UniVisual is also developing a smaller version of the system with a 180-degree screen, which uses a set of just three long-life LED projectors. Hopefully, we’ll start to see these sort of immersive simulators show up at entertaiment venues around the world in the not-too-distant future.