After months of anticipation, Sony today announced their next-generation PlayStation console, the PS4. Despite showing off the controller (which we’ve already seen,) Sony continues to be evasive about showing off the console itself, or discussing pricing. We’re guessing they’re saving that for E3 this Summer. 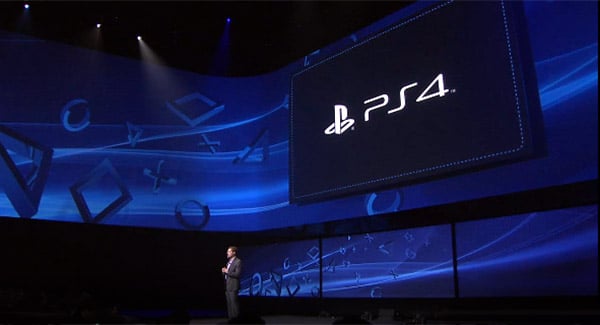 Kicking off the presentation with the tagline “Playstation Wants to Win the War Against Reality,” Sony wowed a massive crowd gathered in New York and on the web to see the reveal of the new console with an epic, 2+ hour stage presentation.

The PlayStation 4 is a completely revamped gaming system and ecosystem, running on a “simplified and streamlined” platform, designed for ease of development while providing a tremendous amount of technical power. PS4 Lead System Architect Mark Cerny – producer behind Marble Madness, Crash Bandicoot, Sonic the Hedghog 2 and designer on numerous other popular games showed off the new platform’s architecture, which has more in common with high-end gaming PCs than previous consoles. 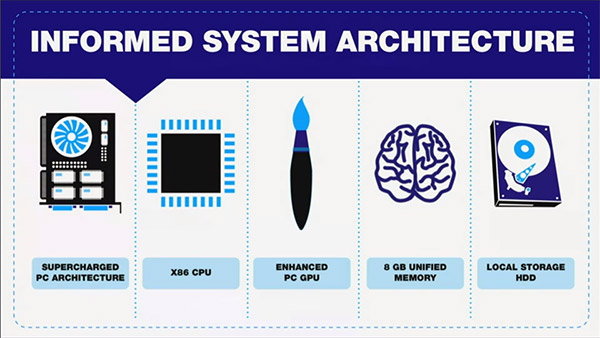 Similar to PC architecture, the PlayStation 4 will run on a high-end X86-based CPU, with a “highly-enhanced” PC GPU, and 8GB unified GDDR5 RAM, with 176GBps bandwidth. The system will have a powerful 8-core 64-bit AMD CPU and its 1.84 TFLOP Radeon GPU will reside on the same die to enhance performance. In addition, the system will use a hard drive to provide ample storage capacity. It will also sport a 6X speed Blu-ray drive, as well as USB 3.0. Here’s a quick spec chart, courtesy of Sony: 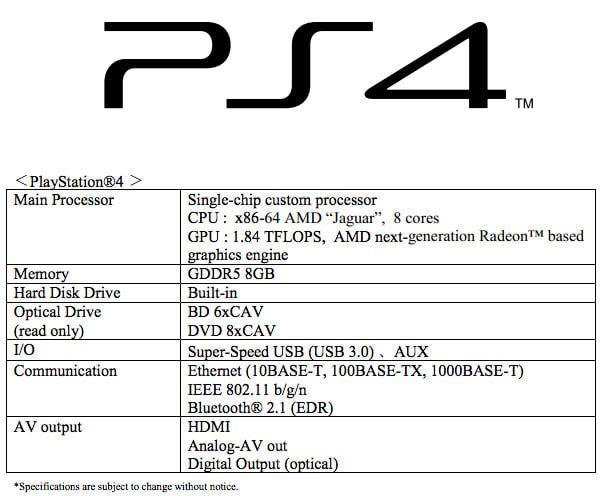 To give you an idea of just how powerful the new hardware is, here’s a face rendered using Quantic Dream’s incredible facial animation and shading technologies, running on preliminary PS4 hardware. While the still image is impressive, it’s even more incredible in motion. Could we finally be at the point where console graphics are as good as what you can see in the movies? Probably not, but I’m still excited to see the final hardware in action. 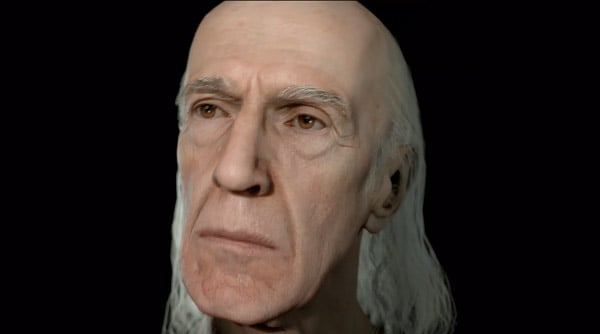 The new DualShock 4 controller is exactly as we saw a few days ago, offering improved analog sticks, enhanced rumble, lower latency, a headphone jack, a small touchpad, player color illumination, and a “Share” button for instantaneous sharing of gameplay videos and other content. 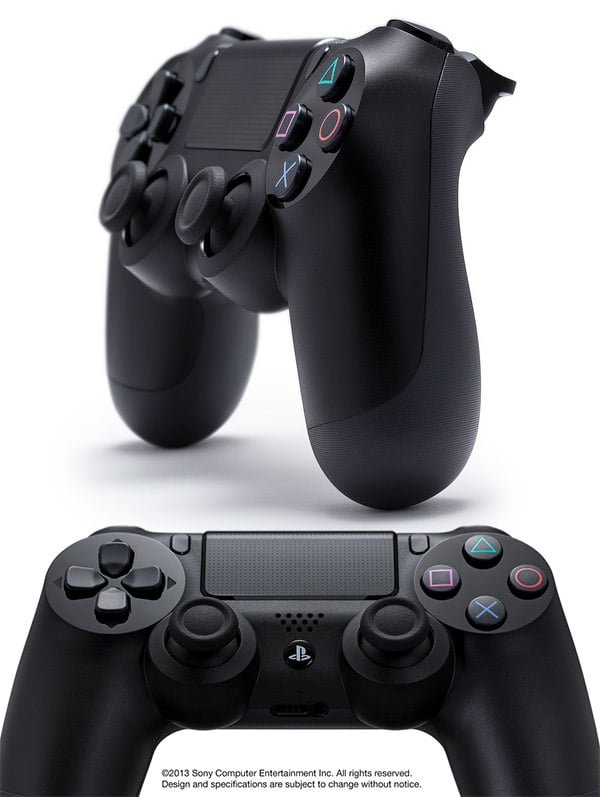 In addition, the system will come with a stereo depth camera that can detect the position of controllers from across the room. 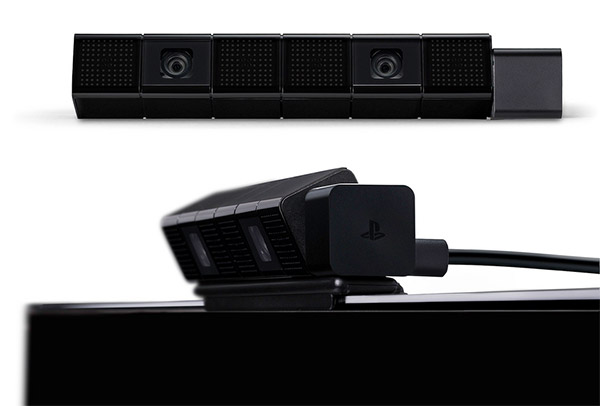 Perhaps one of the coolest features Sony revealed was the ability to suspend and immediately resume games in RAM. The PS4 hardware even has a specialized background processing chip for uploads/downloads. 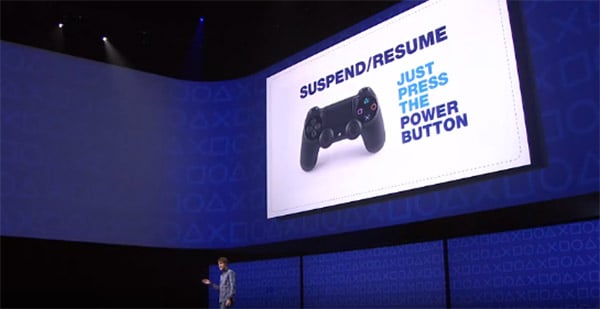 In addition to background downloads, this will enable you to start playing newly-installed games as they are are being downloaded, so you won’t have to wait for massive downloads to complete before you can play. Though I doubt every PS4 title will support this technology. The new PS4 user interface seems very clean and easy to use, almost like the Microsoft Windows 8 “Metro” interface. Maybe it’s just the blue background and the fonts, but it seems very similar to me. An odd choice coming from one of Microsoft’s biggest competitors.

To support sharing and social interaction, the PS4 will have a dedicated “always-on” video compression and decompression technology, which will enable instantaneous sharing and spectating of video content directly within games. Plus the console will offer a new “Friends” interface based on real-world friends, with less emphasis on avatars, likely to incorporate relationships from existing social networks (I’m assuming there will be Facebook integration of some sort.) 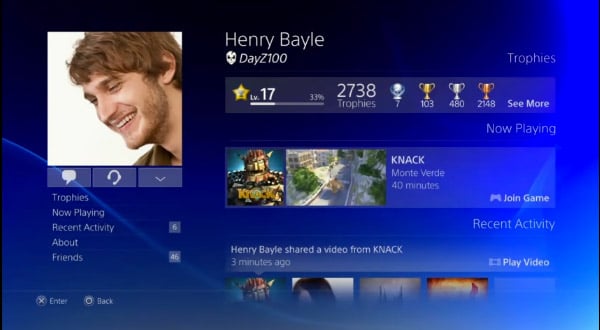 Sony continued to drive home the idea that the PlayStation ecosystem will be less about being tied to your couch, and player-centered. With that in mind, they will offer companion apps for tablets, smartphones and other mobile devices, as well as an improved Remote Play capability on PS Vita. According to Sony Gaikai CEO David Perry, “Our longterm goal is to make every PS4 game playable on PS Vita using local Wi-fi.”

Gaikai’s PlayStation Cloud gaming solution will also play a big part of the PS4 experience providing features like an instant free trials of games, and also involved in some way with real-time spectating of your friend’s gameplay. You can even allow other players to take over your controller remotely to help you get through a difficult part of a game. 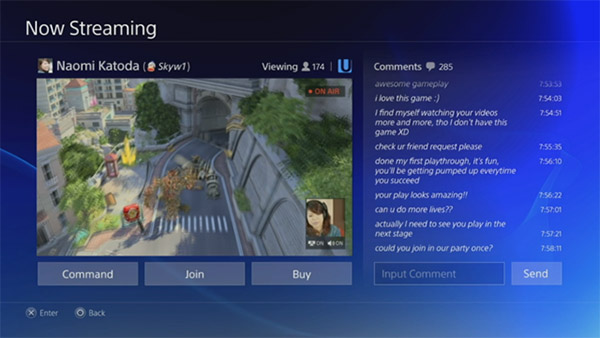 I’m guessing this is to keep the complexity and cost of the system down, but I don’t want to have to keep my old PS3 around in order to play my collection of current-gen games. That said, Sony is looking at ways to play old games from the PS1, PS2 and PS3 via the Gaikai cloud platform, which will roll out in phases over time.

While Sony steered clear of showing actual PS4 hardware, they did introduced a number of new game titles, and showed PS4 demo footage of many of them. Here are a few of the titles coming to the PlayStation 4:

Knack – an action platformer produced by Mark Cerny, the Systems Architect behind the PS4. It wasn’t really clear from the demo what the gameplay will be like, but if anyone is going to get the most out of the PS4 hardware, you’d think it was its own architect. 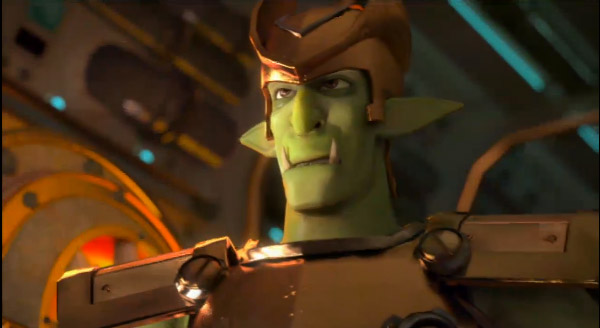 KillZone: Shadowfall – an incredible looking new FPS from Guerilla Games, with graphics and physics better than anything I’ve seen. One can only hope the final game looks as good as these in-game screens: 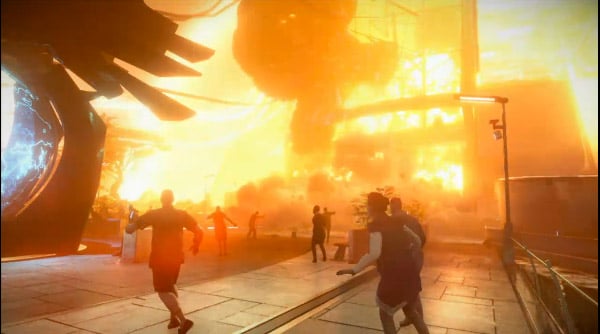 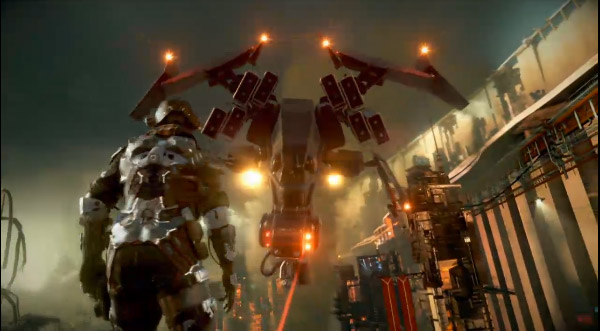 DriveClub – a new racer from Evolution Studios, focused on team-based racing. The game will feature asyncronous and real-time group play, and will work with a companion DriveClub app on mobile devices, which will allow you to initiate challenges and view stats. The game is all about an immersive first-person driving experience, and the brief demo footage didn’t disappoint. 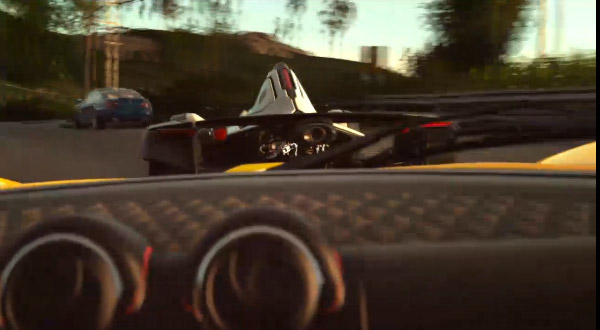 The game will feature insanely detailed cars, every element of which are based on real-world parts and physics. Just check out the detail on this carbon fiber: 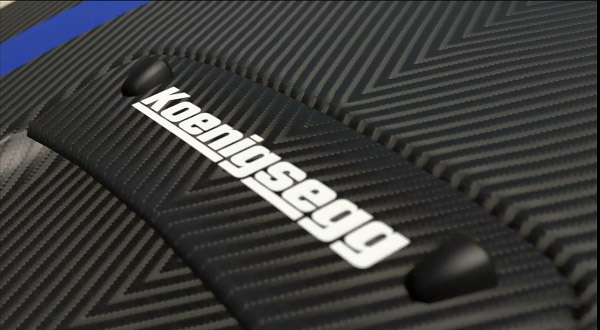 inFamous: Second Son – Developed by Sucker Punch, the PS4 exclusive game is a sequel of sorts to the popular franchise, featuring an Orwellian future in which police monitor everything, and people with superhuman powers roam the streets. 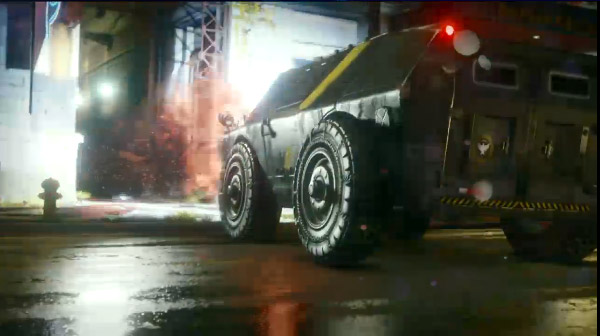 The Witness – a cool looking exploration/puzzle game from Jonathan Blow, Creator of Braid. Its challenging puzzles are designed to guide you deftly “from confusion to understanding.” The game will first arrive on PS4 before it hits other platforms. 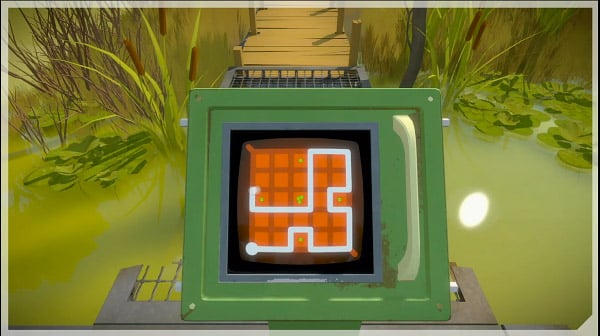 Media Molecule, creator of LittleBigPlanet demoed their “record your dreams” concept. By combining the PlayStation Move controller with PS4’s powerful hardware, they were able to sculpt items in 3D space with ease. These objects can then be combined to build larger sets and game levels. This wasn’t from a specific game, but still showed off some impressive interactions. I can see this showing up in the next LittleBigPlanet or a similar world-building adventure. 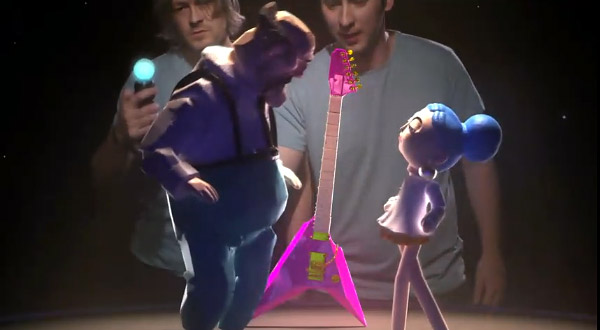 In addition to first-party and indie studios, Capcom showed off its new PS4-specific gaming engine, codenamed “Panta Rhei”, along with its first title, tentatively titled Deep Down. 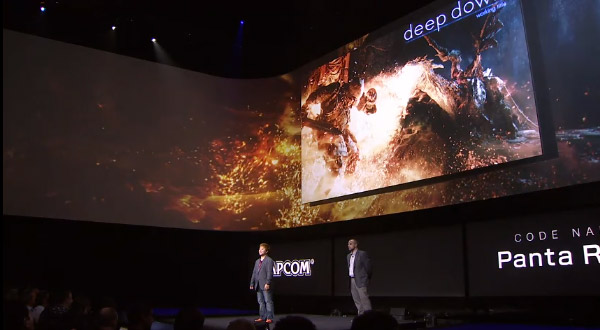 Square Enix is also on board for the PS4, and showed off its “target quality” for the new platform using its new “Luminous” engine. Though it showed no specific games, only describing the PS4 as “a game developer’s dream,” and mentioned that an as yet unnamed Final Fantasy title was in the works. 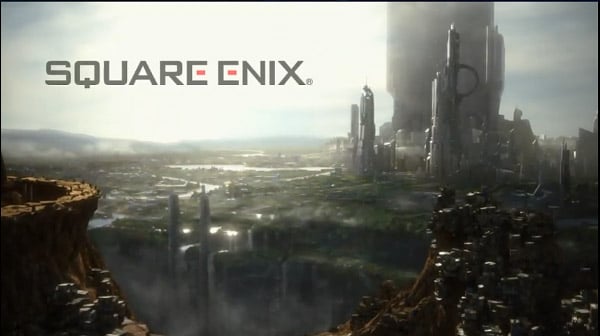 PC developer Blizzard Entertainment announced a strategic partnership with Sony to launch games on both the PS3 and PS4, with a console version of Diablo III currently under development. Activision is committed as well, and confirmed that Bungie’s epic new FPS Destiny will be released on the PS4 (and the PS3).

It’s clear that Sony means business with the PS4, launching not only a completely new hardware architecture, based on high-end PC gaming, but a variety of new IP and game titles to take full advantage of the enhanced hardware.

While it wasn’t actually part of the festivities, Sony revealed that the PlayStation 4 is expected to hit stores for the “2013 holiday season” on the very last slide they presented. Now that they’ve whet our appetites, I want to see the actual hardware, and find out the pricing and final release date.

Your move, Microsoft. Time to show us what you’ve got up your sleeves with the Xbox 720 – or whatever it’s called.