…if you know how to play the piano or any other chordophone you might be thinking, “All keyboards are pressure sensitive!” Which is true: the harder you strike a key on a piano, the louder the sound it makes. But the Seaboard’s keys not only let you control volume, they also let you alter a key’s pitch and timbre. In other words, you can make it sound like a string instrument even though you’re playing on keys. 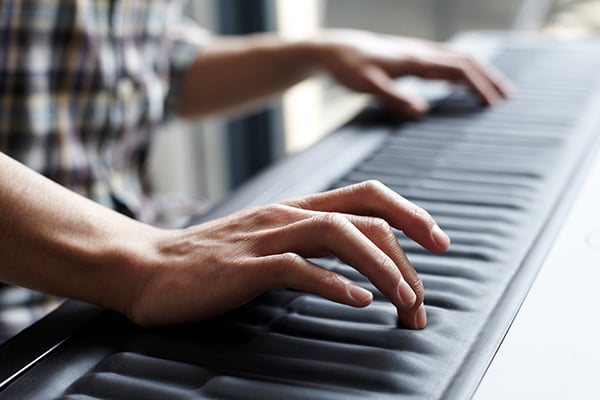 The Seaboard was invented by Roland Lamb. It’s one of the first applications of Lamb’s SEA (Sensory, Elastic and Adaptive) Interface, a “three-dimensional pressure-sensing” interface. The best thing about the Seaboard is that you don’t have to know how this fancy technology works because it’s very intuitive to operate:

Dougal Shaw of BBC News recently talked with Lamb about the Seaboard (there’s a copy of this video on YouTube as well):

Lamb’s company Roli will soon be offering the first edition of the Seaboard called the Grand. Only 88 units will be sold, each named after a note on a keyboard. I also wouldn’t be surprised if each one cost 88 grand. It seems that the instrument will also come with a complementary program called SoundDial. Pre-orders for the Seaboard Grand will begin on April; you can register on Roli’s website if you want to be notified about the Grand’s availability.