At first, you might think what you’re looking at is just a cool illuminated wall sculpture. Well it is that, but it’s actually more. It’s actually a weather forecaster with a tangible user interface. 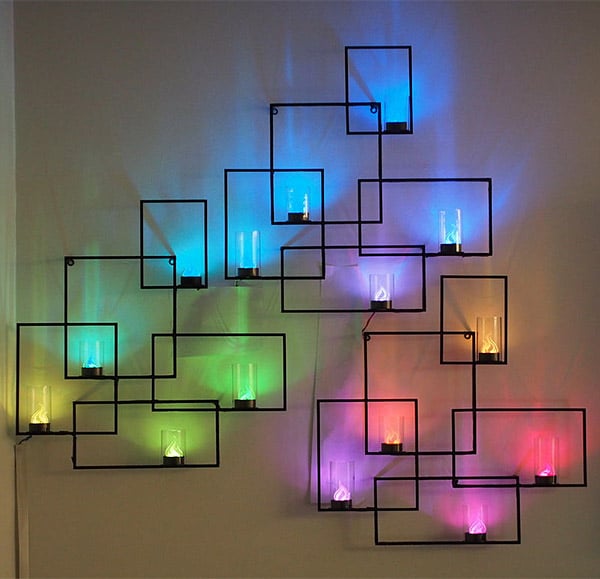 This interactive LED art was assembled by Instructables contributor and Parsons design student Adiel Fernandez. He built the wall unit using a set of three sconces found at CB2, rigged with a digitally-addressable LED scrip, cut into pieces that he placed into the sconces. His original concept was to simply rig the sconce with flickering LEDs to make them look like candles without the inconvenience of actual candles and flame, but ultimately ended up with a much more interactive pieces.

The wall sculpture is controlled by a small acrylic cube with icons on each side. Inside the cube is a gyroscope, accelerometer, XBee radio and lithium-polymer battery. Rotating the cube to face an icon upwards will switch the LEDs between 6 modes, described in the words of its creator as follows:

Here’s a look at the controller cube in action:

And here’s a brief demo of the wall as it lights up:

At this point, the temperature data is hard-coded into the system, but Adiel plans to get it wired up to an internet data source soon. There aren’t too many more details on the build available, but you can see what there is over on Instructables.