It may not look like much, but this digital clock is actually the most depressing and horrifying timepiece I have seen. Made by artist Tom Schofield, the clock doesn’t tell the time. Instead it’s a visualization of the Doomsday Clock, a metric of global disaster made by The Bulletin of the Atomic Scientists. 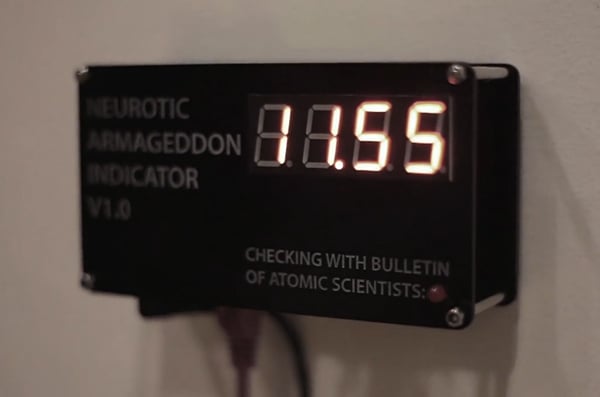 Tom calls his creation the Neurotic Armaggedon Indicator. It’s neurotic because the clock’s other half is a server that constantly checks the home page of The Bulletin to find out the status of the Doomsday Clock. In truth, the Doomsday Clock is only adjusted every couple of years or so based on input from scientists and other authoritative sources.

Originally founded by scientists who worked on the Manhattan Project, the Bulletin tracks the dangers posed by man-made technologies – like nuclear power – as well as environmental factors like climate change. The closer it is to midnight, the closer we are to wiping all of humanity. Yep, we’re at 11:55 p.m.

I hope they never come out with a personalized version of the Doomsday Clock.

[via Popular Science via The Presurfer]