MAKI: Print Your Own Robot Using a 3D Printer

Most of us don’t have a 3D printer. But if you do – or use a service like Shapeways – and you want to build your own robot, check this out. You can build a humanoid robot head like MAKI, an “emotive robot” using 3D printed parts plus some third-party tech. 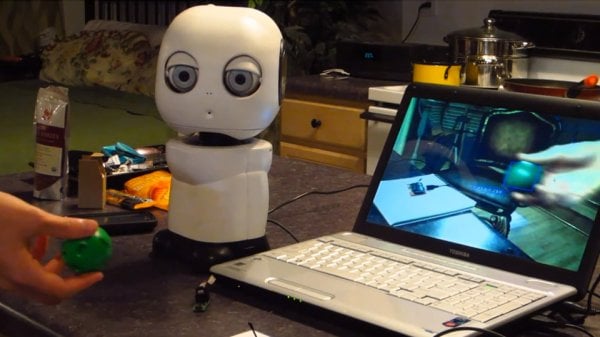 MAKI was designed by HelloRobo, with the goal of providing a fairly inexpensive platform so researchers or home users can work on developing interactive robot software without having to design their own models from scratch. So what kind of money are we talking here? Well, $30(USD) gets you the files to print MAKI parts. Since users decide what their MAKI will be used for, they only need to buy the components they need for their purposes. Therefore, it should be relatively inexpensive compared making your robot the old fashioned way. That said, starting at $585, you can purchase all of the electronic and mechanical parts necessary, minus the 3D printed components to build a complete MAKI robot. Though if you want a fully-assembled MAKI with all of its parts, they are offering a limited run for $3200.

A fully-assembled MAKI is a six servo robot capable of moving its head and eyes, and has speakers and a microphone built in. It has a webcam built into its head, and is capable of vision processing, when used with the appropriate software. It can also interface with other devices using ZigBee wireless communications.

MAKI can be printed on printers with a build envelope of at least 150mm x 150mm x 140mm. If you are interested, the MAKI Kickstarter has 18 days left and some of the stretch goals include adding arms to the MAKI design using HelloRobo’s AX-12 grippers, or introducing smartphone/Raspberry Pi integration. If that sounds good, head on over to Kickstarter and check it all out.