A few units of the much hyped Oculus Rift 3D headset are now in the hands of developers and testers. But Stefan Welker wants you to know that if you have a modern Android smartphone, you already have half of a 3D head-mounted display. Welker and his colleagues are working on releasing the Durovis Dive, an open source 3D gaming system that works with Android smarphones. 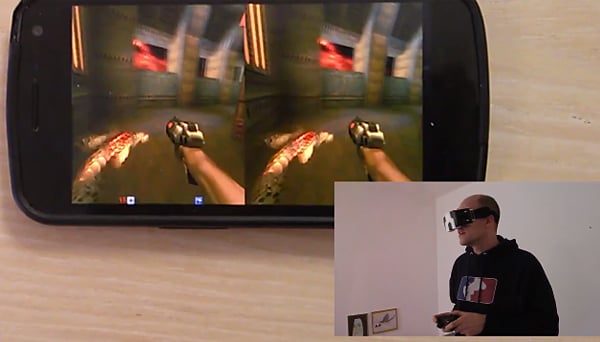 The current prototype of the Durovis Dive uses a 3D-printed case and a pair of lenses jacked from cheap binoculars. The head-tracking software taps into the smartphone’s accelerometer, compass and gyroscope. Currently the only game that works for it is a modified version of Quake 2, but as Welker mentions in the video other games can be tweaked to work with the Durovis Dive.

The consumer version of the Durovis Dive should be released by August 2013, but Welker already posted the software (including the modded Quake 2) and instructions to make your own on the Durovis Dive website.