If Wikipedia Had a Print Edition

How long has it been since you actually cracked an encyclopedia open? Most people head straight to their computers and Google whatever it is they need more information on these days. Few, if any, still turn to the volumes of Britannica or Funk and Wagnalls, because what’s printed there is likely to be outdated. 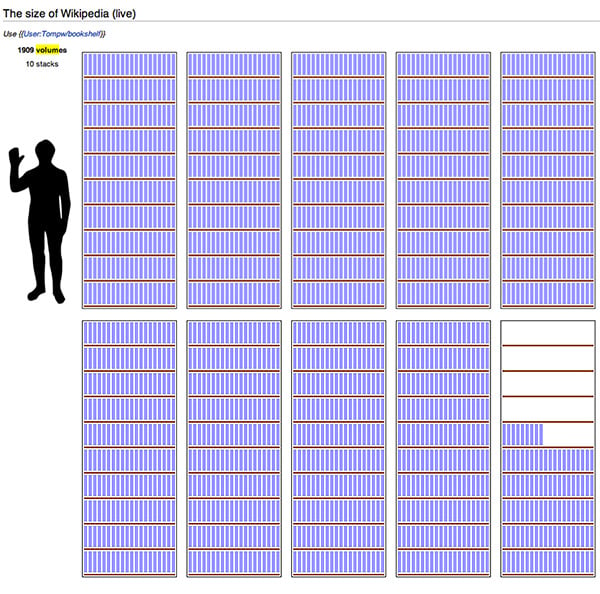 Many searches for info on Google direct you straight to Wikipedia, which I’m sure you’ve already used or at least are familiar with. Wikipedia boasts of being available in a bevy of languages and containing entries from most fields, including current events.

But what if all the entries on Wikipedia were sorted and printed into physical volumes? How many volumes would there be, and how much space would all of them take up? The answer, thanks to Wikipedia editor Tompw is 1,908. For clarity, that’s 1,908 Encyclopedia Britannica-sized volumes that will occupy almost 10 entire shelves!

Thus, the text of the English Wikipedia is currently equivalent to 1,907.2 volumes of the Encyclopædia Britannica.

Of course, this number keeps growing. Thank heavens for the Internet.