One of the most basic features of Google Glass is its ability to display a map. The folks behind that feature probably didn’t think people would use the wearable computer to navigate virtual worlds though. App developer Mike DiGiovanni is working on an app for Glass that displays a real-time GPS map of his location in Grand Theft Auto 3 as he’s playing. It’s redundant, but it looks really cool. 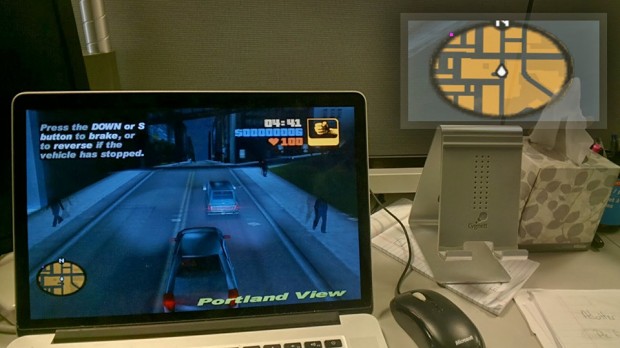 Mike hasn’t provided a detailed explanation of how he made the app, but he said on Google+ that he’s considering sharing the app once he’s polished it. Speaking with Examiner, Mike also said he wants to make more apps for games, citing a rearview mirror for Mario Kart or a recreation of the slick menu interface from Dead Space. The tiny display on Glass may also be great for showing data that’s not meant to be seen by other players.

The videogame applications for Glass are very interesting, but I think gamers would also love to see video game interfaces in real life for kicks. For example, let’s flip Mike’s app and have a GTA skin for Google Maps. Or maybe pair Glass with a sensor and have a life bar indicating your stamina. Or perhaps have quest markers over important landmarks and people.

[via Mike DiGiovanni & Examiner via Polygon]