If you’re a fan of cars, racing, or stupid vehicular stunts you’ve probably seen Ken Block and his Gymkhana series of videos. Gymkhana Five saw Block tearing through the streets of San Francisco and the sixth installment in the YouTube video franchise is now available for our enjoyment. It’s cool, but I don’t think it’s nearly as cool as the last one was. 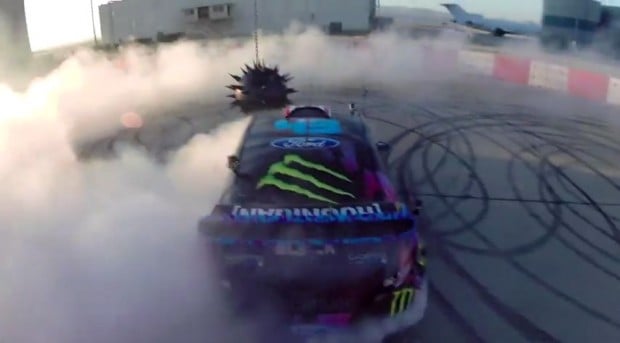 In Gymkhana Six, Block streaks through a course that is set up with red and white boundaries all around making it very tight and narrow. He flies around the course in his Ford Fiesta race car and slides around hitting tetherballs with the back of his car.

He also does doughnuts around some moving Need For Speed Lamborghinis and his trademark guys on Segway scooters. My favorite part is when he slips around corners at full speed and is able to get his car lined up to make it through narrow shipping containers with the doors open. Check out the video for yourself and see if you think it’s better than Gymkhana Five.