At this year’s Consumer Electronics Show (CES), The Verge noted that TV companies had largely given up on 3D displays. A small company called Voxon is not about to give up on the idea, especially because their device actually projects light in three dimensions. They call it the Voxiebox. 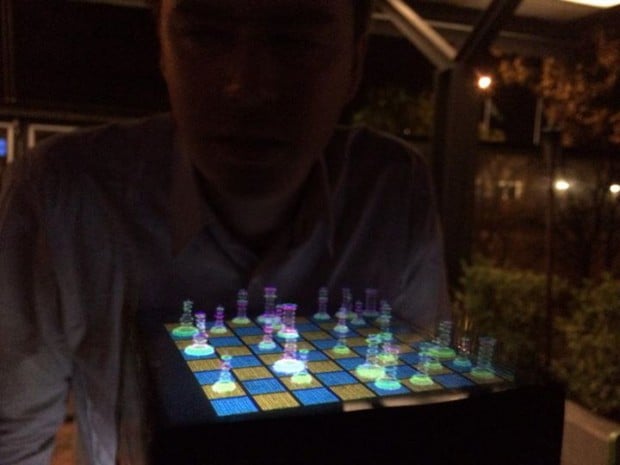 In simple terms, Voxiebox displays a 3D image by aiming a laser projector at a screen that’s rapidly moving up and down. The 3D image is a bit like the light trails produced through long exposure photography, except this one’s happening in real-time. Your view of the image or video being displayed changes appropriately as you move around the Voxiebox, as if you were looking at a physical object.

The video below shows Voxon co-founders Will Tamblyn and Gavin Smith talking about how Voxiebox came about. Sadly the sound is worse than the video’s quality, which is a shame because their presentation is informative and inspiring.

As you can see the current prototype of the Voxiebox has a very low resolution, a death sentence in an industry stuck in PPI cold wars and currently under attack from the 4K marketing blitzkrieg. Another challenge facing Voxon is that content has to be made specifically for the display. You can’t just hook it up to your PC, media player or console and expect to see Call of Duty or Game of Thrones in volumetric 3D. Which is why it’s perfectly understandable that Voxon is aiming its first Voxiebox units not to home users but to arcades. On the other hand… arcades? Like, who-goes-to-arcades-anymore-arcades? Good luck.

Still, Voxon believes that their device will carve its own niche. Last year Polygon came up with an interesting story about Joseph White, an eccentric game developer who’s working on a game and game platform called Voxatron. Voxatron’s world is made out of voxels – volumetric pixels – and Polygon said White made his game imagining that Voxiebox would one day exist. Voxiebox, meet Voxatron:

That’s cool and all, but I don’t think that Voxatron or 3D chess (Voxchess?) is Voxiebox’s killer app. Aside from having a more respectable resolution, I think the device would capture the public’s attention and support more effectively if it worked closely with motion sensors. The strength of 3D objects is that they’re tangible – I think Voxon needs to seize that strength.

Take CastAR for example. Industry reputation and connections aside, Technical Illusions is getting the support they need with its augmented reality device because they’re taking cues from the tangible world. The great news here is that display-wise Voxiebox is much better than CastAR’s complicated setup. Voxon just needs to find the right artwork to paint on its canvas.