Back in January at CES 2014, Audi announced its cool new traffic light recognition system. We already know most of the details of the system with its ability to interface with the traffic lights via Wi-Fi. The point of the system is to tell the driver when the light will turn green. 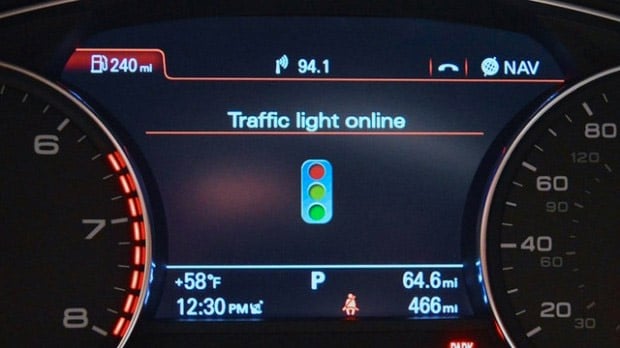 Audi is able to get the traffic light system data via the wireless connection to be able to give the driver a countdown until the light turns green, as well as what speed you’ll need to maintain to make the next light. While those are definitely convenient features, Audi says that the tech could save lots of fuel and reduce emissions as well.

The Audi traffic light information system would be integrated with the engine start/stop tech in the car. The allows the engine to remain turned off until five seconds before the light turns green. As soon as it knows the light is about to change, the engine will re-engage. There are currently start/stop systems which just shut off when you’re stopped, but there’s a fraction of a second lag when accelerating from that standstill.

Audi estimates that if the technology were deployed across Germany, it could save 238 million gallons of fuel and reduce emissions by 15% (though they don’t say over what period of time that savings would take place).

Now if the system could keep morons from sitting there checking Facebook when the light is green, it will be world changing.