A couple of years ago we featured the Decelerator, a helmet that allowed its wearer to see in slow motion. To (erroneously) promote its fiber optic Internet service, Swedish company UmeNet used an Oculus Rift to induce lag in real life. The results are hilarious. 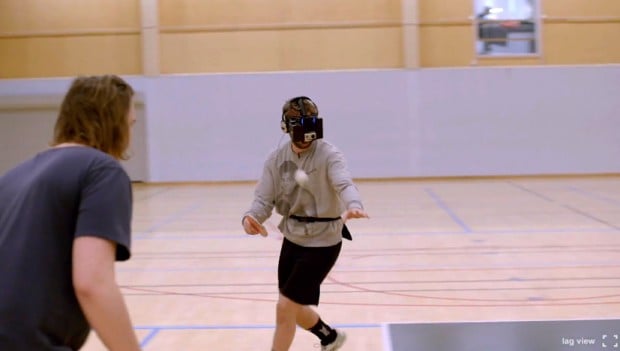 The system works similarly to the Decelerator. A Raspberry Pi mounted on the Rift processes video from a webcam that’s also mounted on the headset, relaying the delayed feed to the headset while the present feed is recorded.

It seems like the system’s lag can be adjusted wirelessly, from a third of a second to three seconds. Three seconds is atrocious for an Internet connection, but as you’ll see it’s debilitating for human vision, which already experiences a slight lag by nature.

As YouTube commenters have pointed out, an Internet connection’s latency isn’t mainly dependent on its speed, which is what UmeNet is bragging about. But here we are, talking about the company anyway, which means the advertisement worked after all.