Man Wears Oculus Rift on Roller Coaster: Is This the Real Life? Is This Just Fantasy?

You may have seen videos of people being floored by the virtual roller coaster demo for the Oculus Rift. Edmond O’Driscoll and Jonathan Forder recently took the experience to another level by recreating a roller coaster ride for the Rift, and then watching that recreation while riding the actual roller coaster. 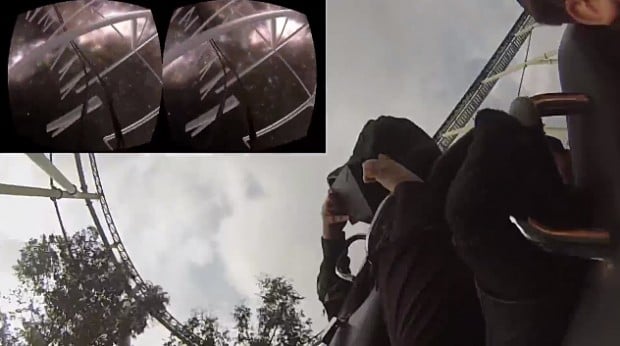 Edmond wore the Rift while Jonathan filmed the experience. They snuck in the headset and a camera along with a laptop and a mouse, which Edmond taped to his body and concealed with his sweatshirt. In an interview with Road to VR, the pair said it them took a few tries to get the virtual ride in sync with its real world counterpart, but once they got it right the experience worked really well.

You may be wondering if the two are virtual reality addicts who have forsaken the appeal of a real life experience. Well, kind of, but their stunt was just an experiment. Edmond and Jonathan believe that in the future, roller coasters and other amusement rides will be enhanced by virtual reality experiences. For instance, the virtual ride that Jonathan made had an outer space background, but as you saw it still proved to be a convincing experience.

Now imagine going on a roller coaster ride but seeing something else entirely that’s in sync with the ride. It could be a horror-themed experience, an aerial tour of a beautiful landscape or maybe an interactive Panzer Dragoon ride. Each passenger could even choose different displays and thus have different experiences on the same ride. It looks like future VR displays should be puke-resistant.