Microsoft Surface Pro 3 Review: One Machine to Rule Them All

As somebody who has to produce content on the road all of the time, I’ve got a whole lot of devices in my backpack – an ultrabook laptop, an iPad, lots of cables and chargers, and still often find myself less productive when traveling than I do when at my desktop at home. My laptop is my go-to tool for creative work, as it runs a full version of Photoshop, and it’s easier to type on. But the iPad is good for reading emails, sketching ideas, doing quick edits, and is easier to travel with because it weighs less. But at the end of the day, there are trade-offs with both devices. Now that I’ve spent some quality time with the Microsoft Surface Pro 3, I think I might have just found the perfect device for creative professionals. 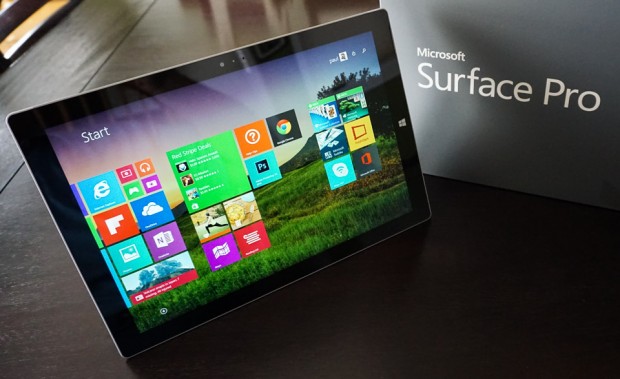 When Microsoft first introduced the Surface a couple of years ago, it was seen more as a direct competitor to the iPad – especially in its Windows RT variants. But Microsoft quickly realized it could offer the ultimate laptop replacement once it released the Pro versions that could run a full version of Windows 8.x Pro. Sporting fast Core i3, i5 or i7 processors, up to 8GB RAM, and a eye-poppingly sharp 2160 x 1440 multi-touch 12″ display, the 3rd generation Surface Pro is no toy. 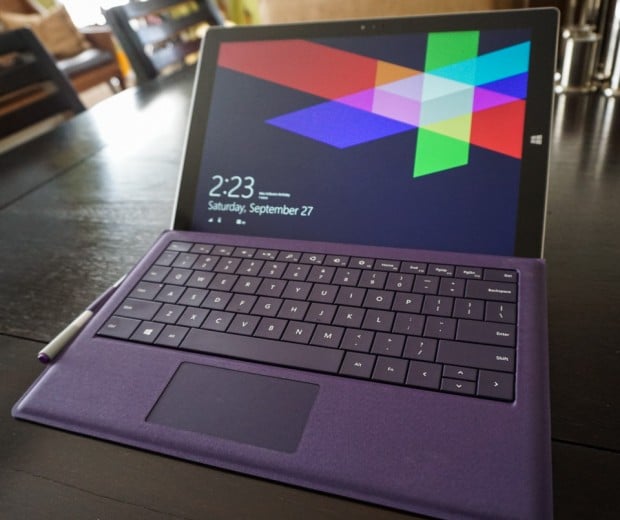 The Surface Pro 3 not only delivers on the laptop/tablet hybrid concept, it’s a pretty great machine at both of those things. I found the 1.9GHz Core i5-4300U review unit I’ve been using to be plenty fast for any of my regular daily tasks, which include editing text and image content, uploading and downloading large files, surfing the web, reading emails, doing image retouching in Photoshop and Lightroom, and the occasional video 1080p edit in Premiere. The Surface Pro 3 was up to the challenge at all of these tasks. 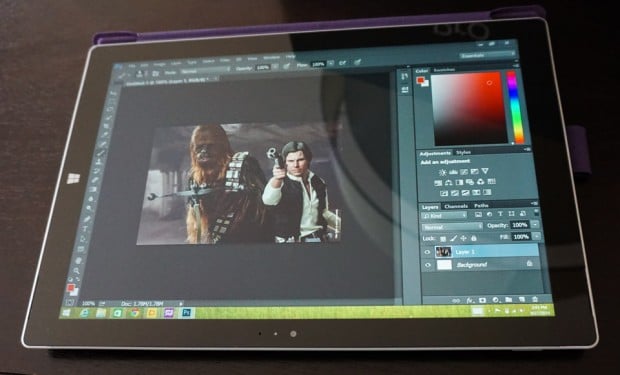 In fact, it handily outperformed my 18 month-old Core i7 ZenBook Prime. This is my go-to laptop, which I always thought was plenty fast: 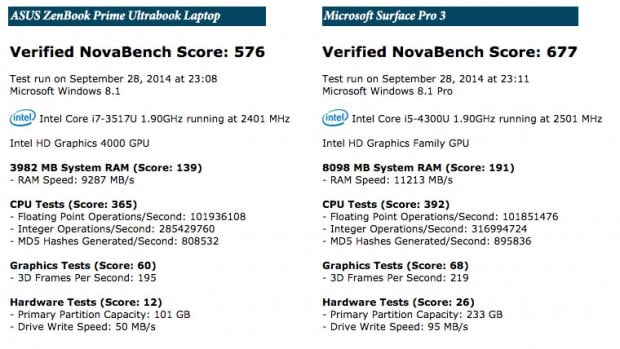 There are times when I’m on a bus, airplane or train, and don’t want to deal with the space a laptop takes up. No problem with the Surface Pro 3. Just remove or flip back the optional Type Cover, and it can be used as a tablet. Lay it flat on a tabletop, and it becomes a Wacom Cintiq style drawing tablet thanks to the included stylus. And unlike iPad styli, this one is precise and fully pressure sensitive. Switching between your fingertip and stylus is seamless, and the Surface does a pretty solid job at palm rejection too. That said, I occasionally ended up opening up one of the various slide-out controls on the edges of the screen while I was drawing with the stylus, but I quickly figured out how to avoid that by changing the angle of my hand. 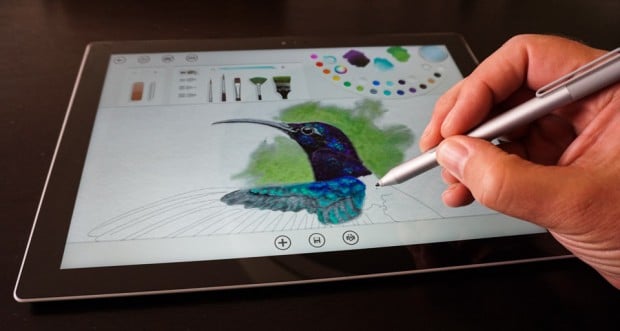 What’s truly wonderful about the Surface Pro 3 is the sheer variety of ways you can interact with it. Whether you want to use it with your fingertips, a keyboard, a trackpad, a mouse or a stylus, you can bounce between all of them seamlessly. In fact, I found myself doing this frequently. Tasks I normally would rely on a mouse for, I reached out and used the touchscreen for – like pinch-zooming in and out of photos in Photoshop. But then I’d use the trackpad to navigate menus. Outlining an image with precision? Stylus to the rescue! Need to grab a quick product image? Snap a photo. While they’re no substitute for your DSLR, it’s got a pair of 5 megapixel cameras, both of which support 1080p 30fps video recording. 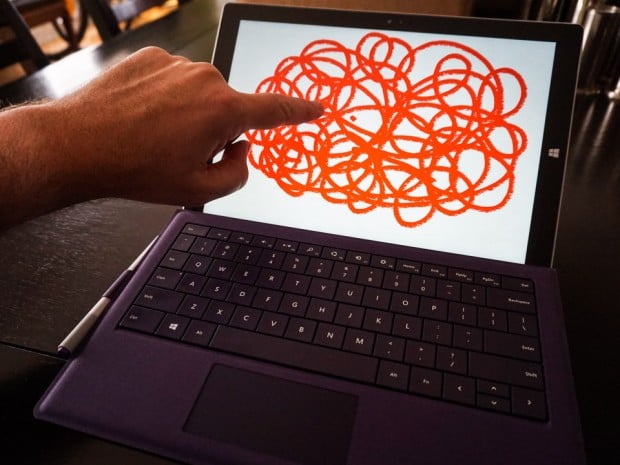 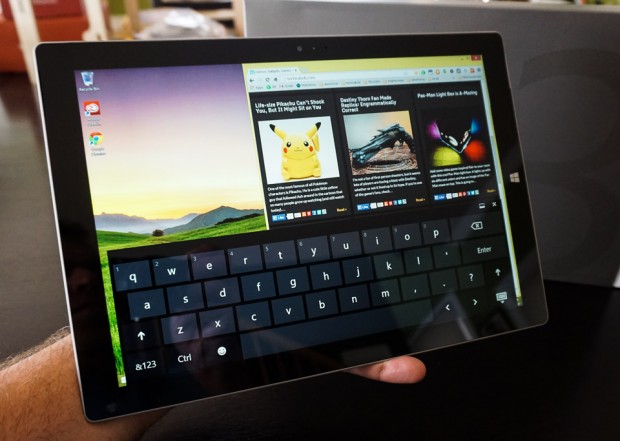 Man, this thing is versatile. Want to use it flat on your lap? No problem. Hold it in the air? Sure. Use it on a table? It’s got a built-in, adjustable stand that pops out of the back. The only deficiency I found in this department was being able to use on your lap, because the stand is a skinny piece of metal – I wouldn’t want that digging into my thighs. 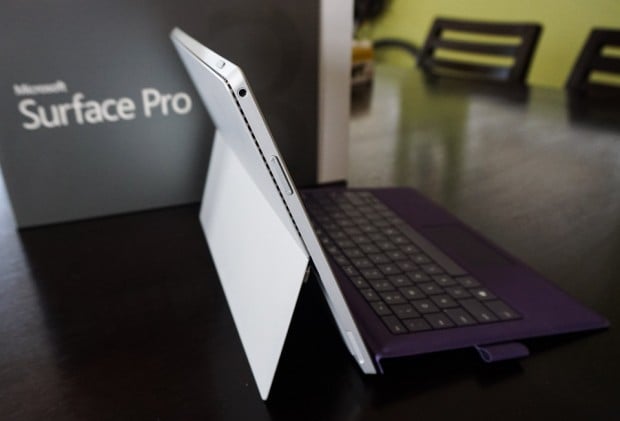 Not only does the Surface Pro 3 handle a wide variety of tasks and input methods with aplomb, it’s a beautiful piece of hardware. Made from a substantial magnesium body, and measuring in at 11.5″ (H) x 7.93″(W) x 0.36″ (D), it’s about the size of a pad of paper. Without the Type Cover and stylus, it weighs about 1.76 lbs. With those accessories in place, you’re looking at about 2.4 lbs., about the same as an 11″ MacBook Air, and several ounces lighter than a 13″ Air. 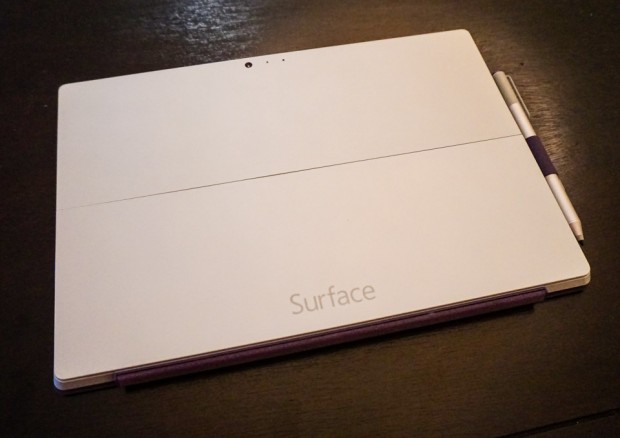 While you can type on screen using the touchscreen, the optional Type Cover ($129.99) is a must-buy if you type with any regularity. This full-size backlit keyboard connects directly to the Surface using a magnetic hinge, and requires no external battery charger like add-on Bluetooth keyboards. It can also be positioned flat against the desk or at an angle for more comfortable typing. It’s also got a built in trackpad. 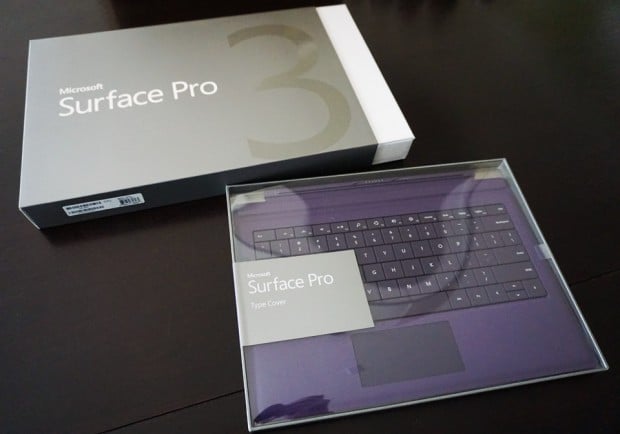 Functionally, the Type Cover works well, and is even smart enough to turn off when you flip it around to the back of the Surface. I have a couple of complaints about the Type Cover though – one, it’s covered with a soft touch velour that looks nice, but I’m pretty sure will attract grease and dirt with time. In a week of use, it had already attracted quite a bit of dust (which I cleaned off before these photos). Also, the holder for the stylus is an add-on bit that you stick on with an adhesive pad. While I appreciate the fact that this allows you to choose where to place your stylus, I had the adhesive come off on one occasion, and that bit just feels like an afterthought. It really should be integral to the cover. Even better, it would be nice if the Surface itself had a place to stow or at least clip on the stylus, because I’d sure hate to lose it. 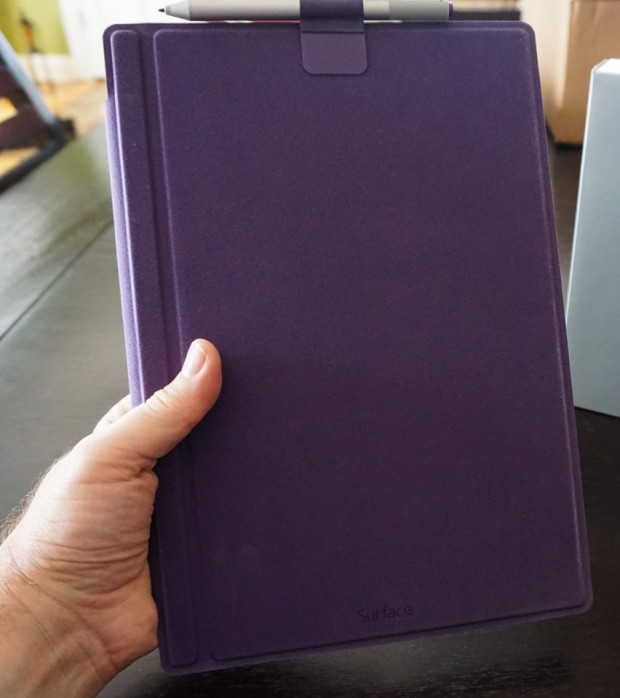 Battery life for the Surface Pro 3 is rated at 9 hours for web browsing, though with my typical usage, I got between 7 and 8 hours on a charge. Other pertinent specs for the Surface Pro 3 include 802.11 a/b/g/n/ac wireless networking, Bluetooth 4.0 low energy support, an accelerometer, gyroscope, magnetometer, ambient light sensor, microSD reader (hidden behind the kickstand), USB 3.0 port, and a Mini DisplayPort video output. While I wish there was a full size SD slot for pulling images off my camera, at least there’s an easy way to get data in and out of the device without additional hardware. Also, keep in mind that there’s no cellular connectivity available like there is with the iPad, so you may need to use your smartphone as a hotspot if you aren’t in Wi-Fi range. 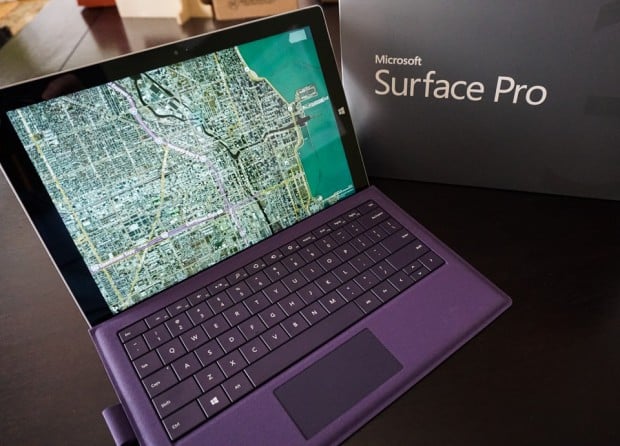 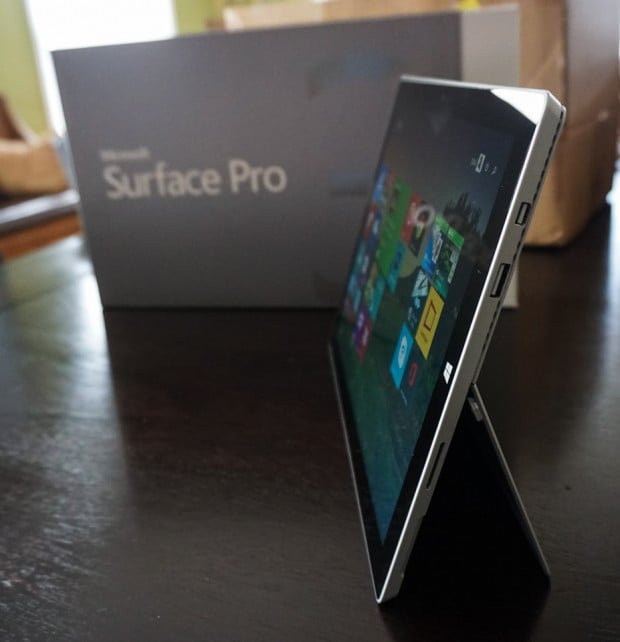 While the power adapter isn’t as small as the ones that come with tablets, it’s smaller than many laptop adapters, and has the bonus of having an extra USB charging port built into it. The power connector is also idiot-proof, with a thin blade that connects to the side of the device and automatically aligns using magnets whether you place it upside-down or rightside-up. 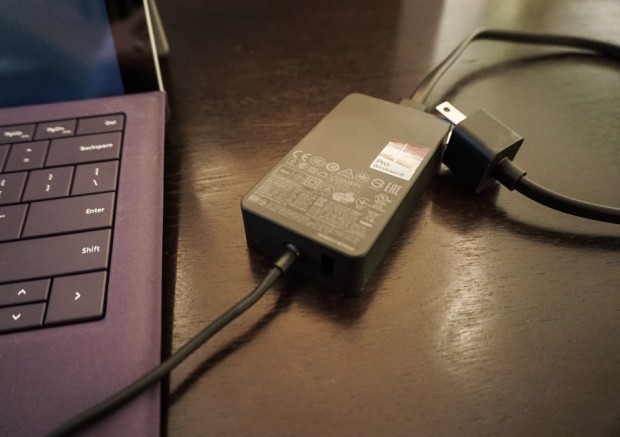 Overall, the Surface Pro 3 is a fantastic piece of hardware. It’s fast, lightweight, runs Windows applications, has very good battery life, a really sharp display, and it’s beautifully crafted. Plus, it works however you like to work, thanks to its wide variety of input methods, connectivity and versatile form-factor. It’s especially awesome if you’re in the creative arts. Next time I travel, I might just be leaving my laptop and iPad behind, and just traveling with the Surface Pro 3 and my smartphone. 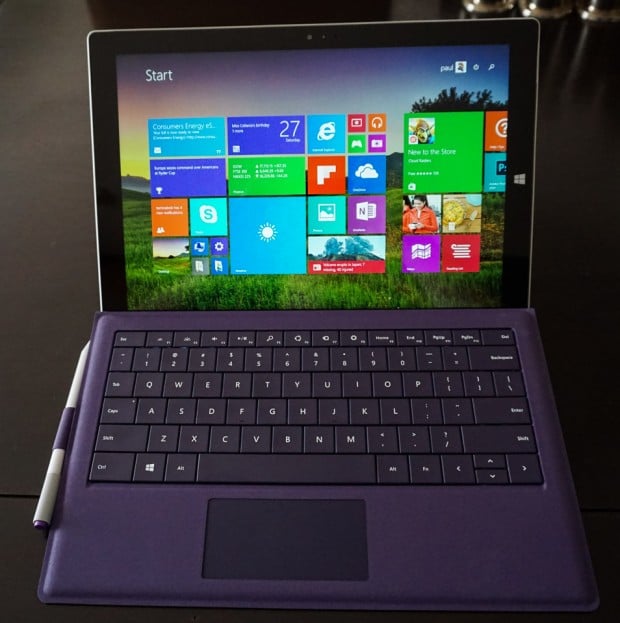 Prices for the Surface Pro 3 range from $799 to $1949(USD), depending on the processor and amount of SSD storage you choose. You can start out with a Core i3 with 64GB of storage and 4GB RAM, or go all the way up to a Core i7 with 512GB and 8GB RAM. The 256GB, Core i5, 8GB RAM version tested here retails for $1299. However, if you go to select Microsoft retail stores by November 2, 2014, there’s an incentive program which lets you get as much as $650 in trade-in credit towards the purchase of a Surface Pro 3 if you turn in a working MacBook Air.