Whiteboards and blackboards are great for group discussions. But they also take attention away from the speaker, especially for participants who insist on writing down everything that’s on the board. That’s where the WriteBoard concept comes in. Anything that’s written on it gets sent to connected mobile devices and other WriteBoards. 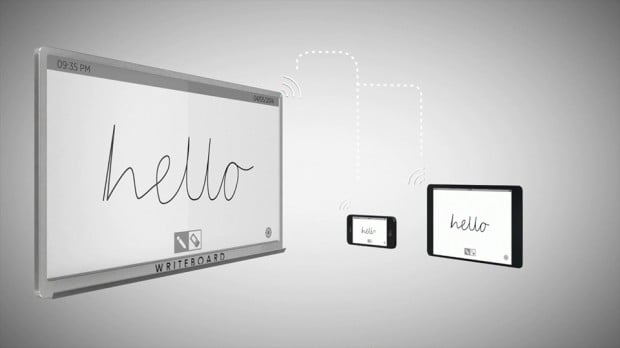 The WriteBoard is a 27″ 1080p LCD monitor with a capacitive touch layer, and will come with a large stylus. Mobile app users can annotate and edit the copies of the board that they receive. The app also lets users send an image from their mobile device to the WriteBoard. Designers David Lindeque, Nicholas Rout and Olivia Pougnet are also thinking of giving users the option to make their WriteBoard public for others to follow. But the best part about the WriteBoard? The 27″ 1080p touchscreen display will supposedly be sold at just $299 (USD).

Unfortunately, the concept does have a couple of big red flags, especially for something that’s already being peddled in the guise of a fundraiser. First of all, it doesn’t seem like David et al have concrete proof of a working prototype. Second, it looks like that insane price tag does have a catch: pop-up ads. It’s the hardware equivalent of a Hulu subscription.

The WriteBoard team is currently raising funds for its concept on Indiegogo, where a pledge of at least $299 gets you the device as a reward. But as with all crowdfunding projects, you should wait for enough proof that this isn’t vaporware before putting your money down.