Bob Alexander wanted to be notified of new mail from his mailbox, but he didn’t want to buy a device for that purpose. He says that many commercially available mail alert gadgets can’t tell the difference between incoming mail that the postman left inside, and outgoing mail that you placed inside. So he built his own radio alert system with the help of a toy mailbox. 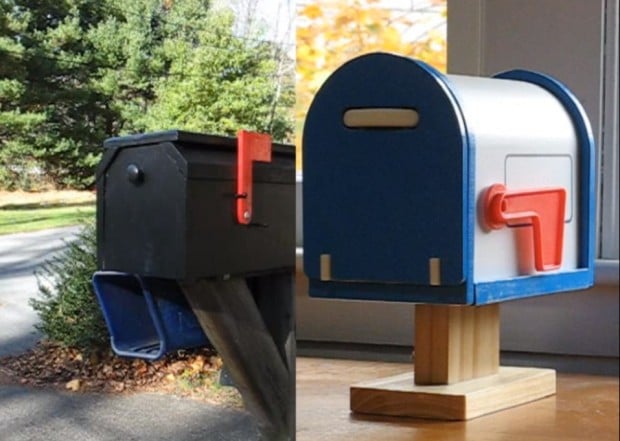 Bob originally planned on using a simple LED-based notification system, but decided to have a bit of fun with his project, which is why he ended up using a toy mailbox. To eliminate false alarms, Bob placed a Microchip 16F1825 PIC microcontroller and three sensors in his actual mailbox. The first is a tilt sensor that determines if the mailbox door is open or closed. The second is a light sensor along with an LED that gives away if there’s mail – or something – inside the mailbox. Finally, there’s a reed switch and a magnet that detects whether the mailbox’s flag is up or down.

In case you didn’t know, you’re supposed to raise the flag on the side of the mailbox to let the mailman know that you have outgoing mail for him to take. Bob takes advantage of this practice with the reed switch to eliminate false alarms. As long as the flag is up, even if the tilt sensor detects that the door has been opened and the light sensor detects there’s something inside the mailbox, the microcontroller will deduce that Bob put outgoing mail in.

You’ve got link! Send your browser to Bob’s blog to find out more about his custom mailbox alert.