Scotty 3D Printing, Scanning & Milling Machine “Teleports” Objects: Beam Me Up and Shave Me Down, Scotty!

A couple of years ago we talked about the Zeus, a 3D printer and scanner that could “fax” an object to another unit by scanning it and then sending the resulting 3D model to the other printer. The Scotty machine has a similar capability, except it can also destroy the original object while it’s being replicated on the second unit, effectively teleporting it. 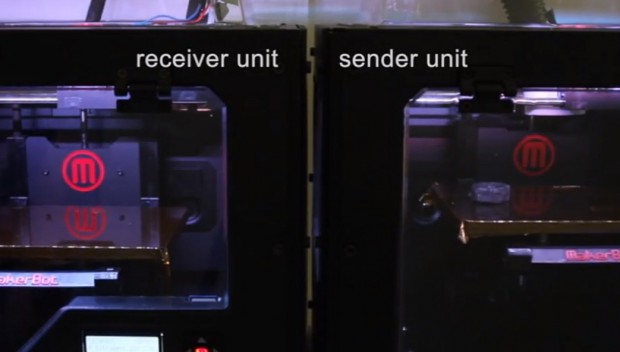 Scotty was made by Stefanie Mueller, Martin Fritzsche, Jan Kossmann, Maximilian Schneider, Jonathan Striebel, and Patrick Baudisch of the Hasso-Plattner Institute. Starting with a MakerBot Replicator 2X, the group added a mill bit and a camera to one of the 3D printer’s extrusion heads, allowing the device to scan and then shave a thin layer of the object. 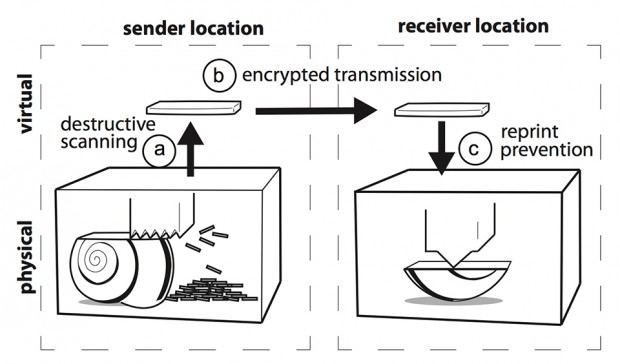 When you place on object to be “teleported”, the sender Scotty scans the topmost layer of the object and then shaves off a thin layer. The scanned file is then encrypted and sent to the receiver Scotty, which decrypts the file and prints the layer. The process is repeated layer by layer until the original object has been milled away and the copy has been printed.

So why would you want to destroy an object instead of duplicating it? For the same reasons that paper shredders and copy protection software exist: security, commercial and even sentimental.

Stefanie and her group also think that this could be a way to buy and sell objects online in the future. The idea is that we’ll enjoy instant delivery without abusing 3D printing’s capacity to duplicate objects endlessly. However, I don’t think that this will be enforceable. People will just keep 3D files of the objects they want to dupe. Besides, the restriction can only be enforced if the seller has a Scotty-like machine. I doubt that 3D printer manufacturers can be forced into turning all of their products into Scottys.

[via Stefanie Mueller via Gadgetify]