Software engineer David Titarenco is working on Game:ref, a small device that identifies mouse-based gaming cheats – such as auto-clicking or aimbots – used in FPS, MOBA, RTS and other competitive games. If it works as planned, it could help secure LAN tournaments and discourage the use of software cheats in online games. 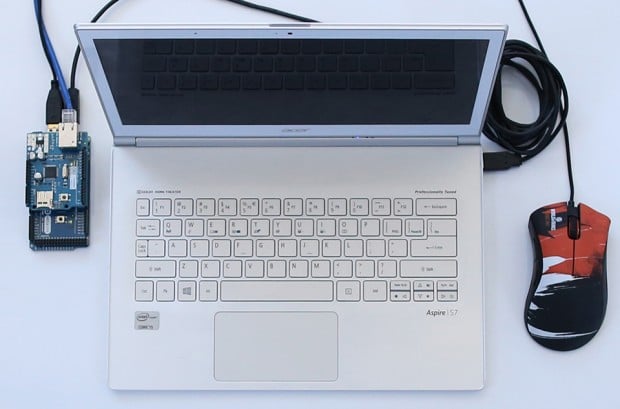 Game:ref is an Arduino-based device that plugs between the mouse and the computer. It gathers the mouse’s movement data and compares it to how the player’s cursor or character moves in the game. In his prototype, David monitored the output in Counter-Strike: Global Offensive by creating “a small server-plugin for CSGO that relays player view angles back to a local server.” If the mouse input doesn’t match the character’s movements, then the player must be cheating.

David believes Game:ref can work with practically any game, cost between $30 (USD) to $100 and barely add mouse latency. That said, he admitted on his blog, on Reddit and with Polygon that Game:ref is still in its early stages and even when completed could still be circumvented with an anti-Game:ref device.

But the idea here is for serious gaming tournaments to use Game:ref to further ensure fair play, and in the case of online games the device would be able to block or at least identify cheaters that use software hacks. Head to David’s blog if you want to know more about his device. If you’re just interested in buying it, keep an eye on Game:ref’s product page for updates, particularly its Kickstarter fundraiser.

[via David Titarenco via Polygon]