The latest generation Dell XPS 13 is an amazing specimen of modern technology, packing a highly-capable PC into a lightweight laptop with an amazing screen, and exceptional build materials. 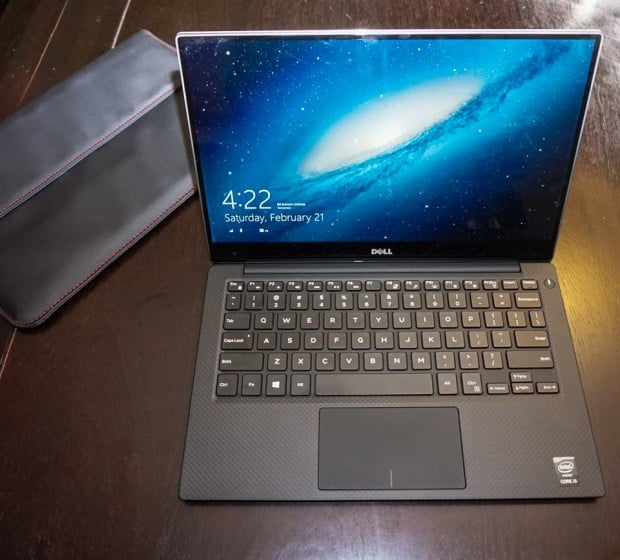 The most obvious breakthrough in the XPS 13 is its nearly borderless “infinity” display, which allows the laptop to pack a 13″ screen into the space that you’d normally have an 11″ or 12″ display. The system comes with either a 1080p display or an incredibly high resolution 3200×1800 “QHD+” touchscreen panel like the one shown here. To put that resolution in perspective, that’s 56% more pixels than a 27″ iMac has on its screen. 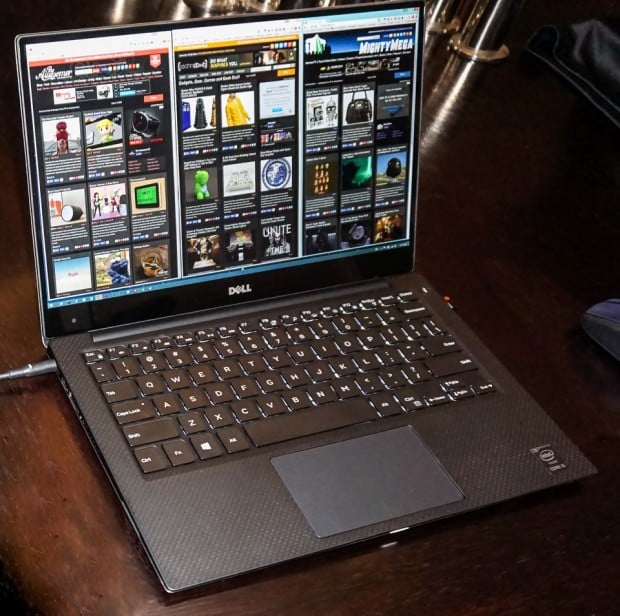 A screen of this resolution has obvious benefits, and a few tradeoffs, but if you’re a creative professional, more pixels is almost always better. In my testing, I was able to fit three full 1024px wide windows side by side on the screen – with room to spare. The added resolution is also great for working with hi-res images, being able to preserve a tremendous amount of image fidelity even when zoomed out. Note that any blurriness seen in the images here is due to the limitations of my camera lens and not the display itself. It’s razor sharp. Damn, now I need a new camera lens. 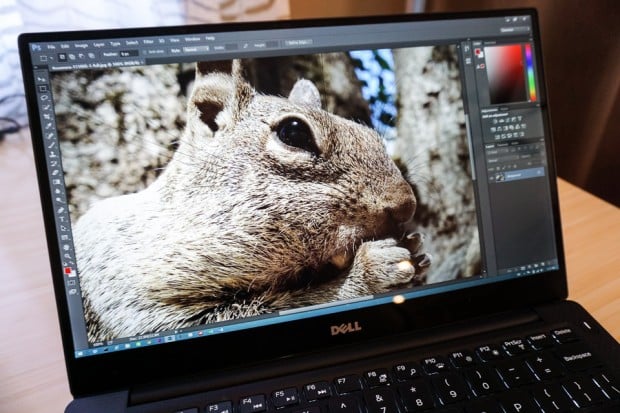 If there’s any downsides to its QHD+ display, its that it does increase battery utilization a bit, and it also takes a little effort to fine-tune the point sizes of typefaces in applications so the text isn’t unusably small. Plus, once you work on a display this sharp, you’ll be pretty spoiled for anything else. One other minor drawback of the screen’s narrow bezel is that they had to place the webcam underneath the screen – this results in a bit of a strange “chincam” effect, and your fingers can show up on screen while you’re typing. Given the fact that I rarely use my webcam, this wasn’t a big deal for me. 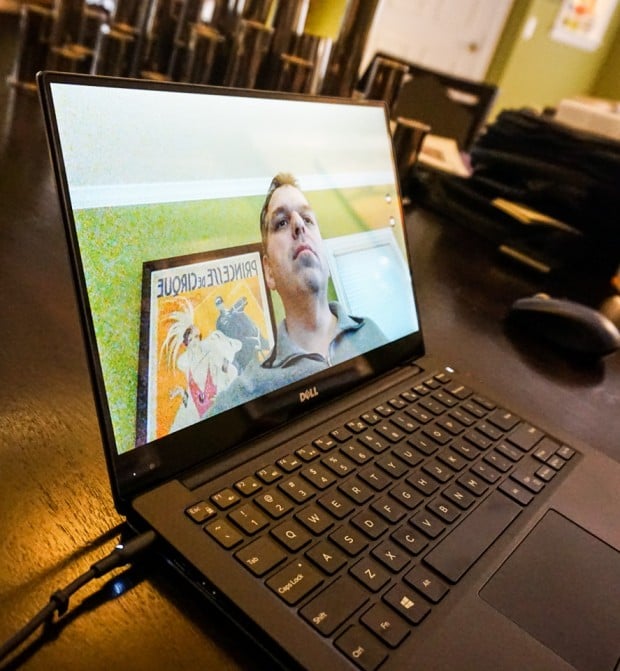 The machine is also quite brilliant in its assembly, feeling substantial in materials and build quality, but still extremely light weight. The QHD+ touchscreen model weighs in at just 2.8lbs, while the 1080p model is just 2.6. It’s made from CNC machined aluminum, has a sleek carbon fiber composite palm rest with a soft-touch coating, and the QHD+ screen is covered with edge-to-edge Gorilla Glass NBT, which protects the touchscreen from scratches and other damage. 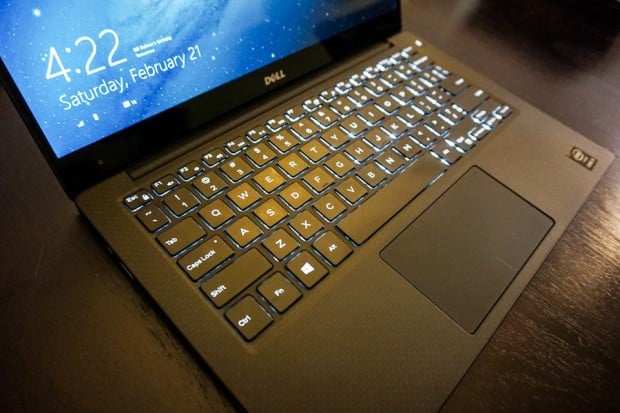 The system has a full sized backlit “chiclet” keyboard, and the keys are well spaced – though I wouldn’t mind just a little more key travel. Below is a large trackpad, which measures 4-1/8″ x 2-5/8″, and it supports multitouch gestures like two-finger scrolling, pinch and zoom. 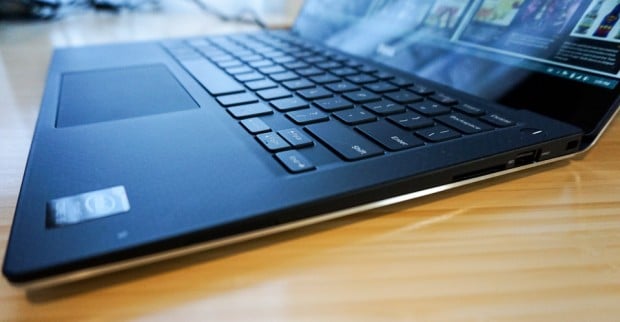 Up until recently, I’ve used a Microsoft Surface Pro 3 as my machine when on the road, and the XPS 13 may have just taken over those duties. The XPS bests the Surface in speed, resolution, display size, and keyboard quality, despite being almost identical in size and weight when the keyboard cover is attached. The only thing I might miss is the pen input. 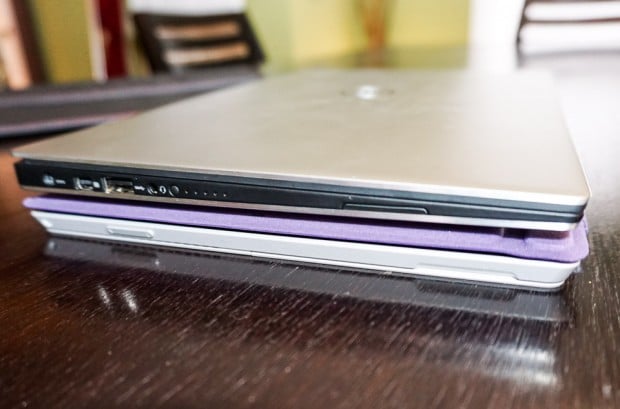 The XPS 13 can be had with one of several Intel Core processors, ranging from a core i3-5010U (3M cache/2.1GHz) all the way up to a Core i7-5600U (4M cache/3.2 GHz). My review unit has the Core i5-5200U (3M cache/2.7GHz) CPU, which is plenty fast for all of the productivity and design apps I use on a daily basis, including Photoshop, Lightroom, Chrome, and Microsoft Office. When using the GeekBench 3 synthetic benchmark, the machine scored 2144 in the 32-bit single core test, and 5102 in the 32-bit multi-core test. These scores improved to 2422 and 4172 respectively after I disabled McAfee and Dell’s Backup applications, and enabling the built in Windows Defender and Backup tools instead. I recommend doing the same. Depending on the model, you get either 4GB or 8GB of RAM, and storage comes in the form of a fast solid state drive in 128GB, 256GB or 512GB capacities. While the SSD is user-upgradeable, RAM isn’t, so you should go for the size you need up front. 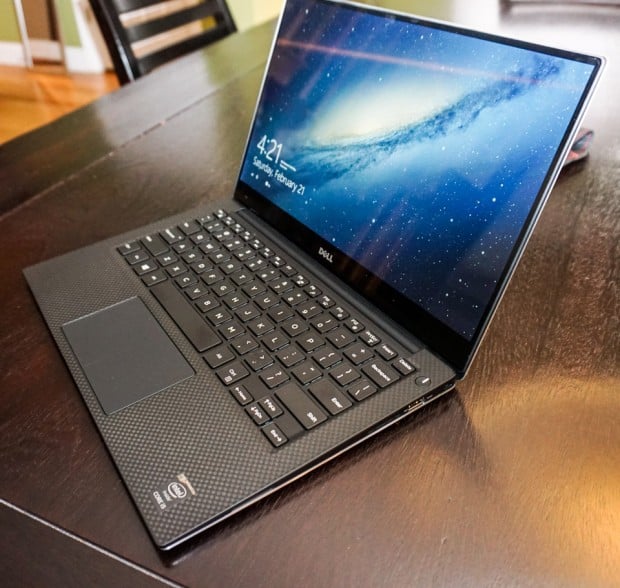 For the Core i5 QHD+ touchscreen model, Dell reports battery life between 8 hours and 11 hours, though these tests were conducted with the screen brightness set to a fairly dim setting. In my real-world tests, I got anywhere between 5 and 10 hours, with the shorter time occurring when streaming video across a wi-fi connection the entire time, and with the screen brightness at 70%. I achieved the 10 hour battery life repeatedly opening and reading documents on a wi-fi connection, and had the brightness dialed down to 60%. These are still pretty solid numbers for a laptop with these specs.

If you need more battery life, you might want to pick up the Dell Power Companion, which packs a 12,000 mAh battery into a compact case, and can give you up to seven extra hours on the XPS. It also can recharge USB devices, and is smartly designed so you can charge it at the same time as using your computer by plugging inline with the laptop’s power adapter. Speaking of power adapters, the one that ships with the XPS 13 is compact and lightweight – smaller than a deck of cards – and you can either hang it straight from a wall outlet or plug it through the included extension cable. 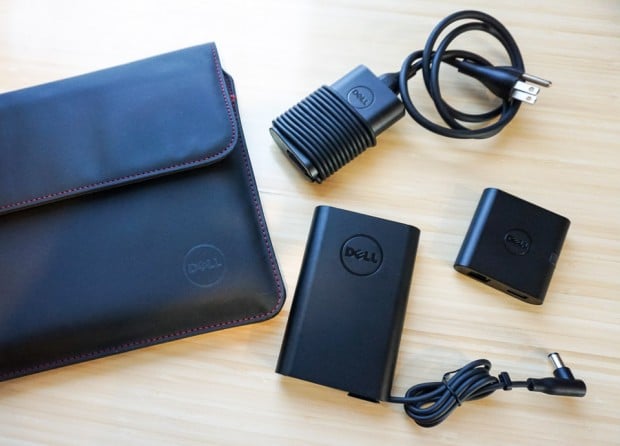 Given its svelte profile, the XPS 13 does pretty well in terms of connectivity, offering 802.11ac wireless, Bluetooth 4.0, Miracast, dual USB 3.0 ports, a mini display port, and a full size SD card slot. It’s also got an impressively loud set of speakers built in, which produce much more volume than I’ve become accustomed to on my Surface Pro 3. For those needing additional ports, Dell offers an accessory which plugs into one of the USB ports and provides HDMI, VGA, Ethernet and a USB 2.0 port. This is a really handy alternative to a docking station, and can be easily tossed in your pocket. 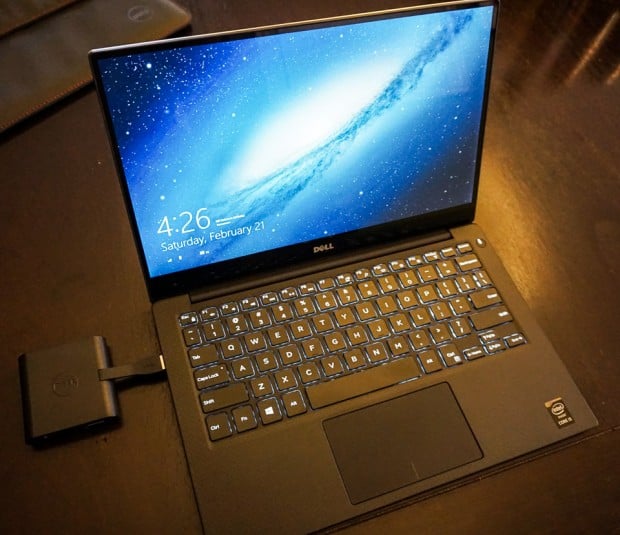 Overall, I’m very impressed with the XPS 13. It packs a lot of capability into an incredibly small and beautifully built package. Prices for the Dell XPS 13 start at $799.99(USD), with the QHD+ touchscreen model reviewed here starting at $1299.99. You can build one to your specifications over on the Dell or Microsoft websites. 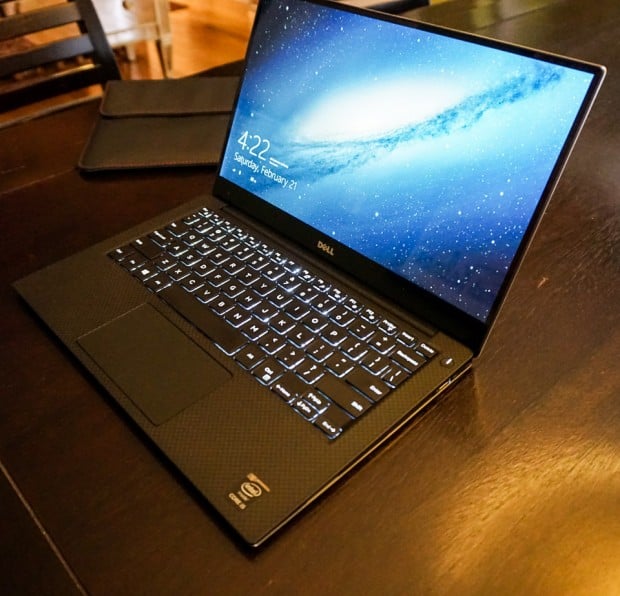 [FTC Disclaimer: Technabob was provided with the hardware tested in this review by Dell at no cost. However, all reviews on Technabob are the unbiased opinions of our authors, and in no way represent the views of the product manufacturers represented here.]